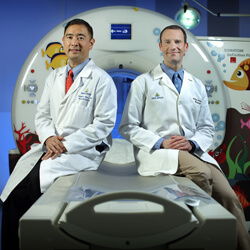 By developing a new way to analyze fewer “slices” in CT scans, Edward Ahn (left) and Jonathan Pindrik (right) say that they may be able to cut radiation exposure in children.
photo by Keith Weller

More than 62 million CT scans are performed each year in the United States, 4 million of them in children. Many of these young patients are receiving periodic or urgent monitoring for hydrocephalus. When the shunts used to treat this fluid-accumulating condition need adjusting or fail, patients often require quick and accurate diagnosis that precludes imaging alternatives such as MRI, leaving children exposed to whopping doses of ionizing radiation—and a significantly increased risk of cancer that could emerge decades after exposure.

But Johns Hopkins neurosurgeons Jonathan Pindrik and Edward Ahn say fast and precise diagnosis need not take a backseat to minimizing radiation exposure. They and their colleagues have hit on a new method that dramatically cuts ionizing radiation delivery to children without sacrificing diagnostic accuracy.

Their approach calls for using only seven “slices” of the brain taken by CT scanners instead of the usual 32 to 40 slices. A recent study found that this method reduced radiation exposure by an average of nearly 92 percent per patient compared with standard head CT scans, while still rendering the images diagnostically accurate.

“Traditional thinking has been that fewer slices would, by definition, mean less clarity and less accuracy, rendering a CT scan suboptimal,” says Pindrik, “but our findings show otherwise.”

In the new study,* the investigators compared two standard CT scans with two limited-slice, low-dose CT scans for each of 50 children, ages 17 and younger, treated for hydrocephalus over five years at the Johns Hopkins Children’s Center. In all 50 patients, the radiation-minimizing technique produced clear and 100 percent accurate images of the brain ventricles, the draining system that carries cerebrospinal fluid in and out of the brain. When capturing changes in ventricle size, however, the low-dose approach resulted in a 4 percent error rate: Two of the 50 images were visually ambiguous, generating confusion among the clinicians who reviewed them.

Although there were no false negatives in the low-dose images and no instances of clinicians falsely perceiving normal ventricular size, there were three instances of clinicians perceiving a change in ventricular size when there was none. On balance, the radiation-minimizing approach was clearly adequate, the researchers say, and would have not compromised treatment outcomes.

Pindrik and Ahn say the radiation-minimizing technique could be especially valuable in pediatric emergency rooms, where it’s urgent to get quick and accurate diagnosis, or for routine evaluation in smaller community hospitals that may lack MRI equipment.

“We have been searching for ways to minimize radiation exposure in kids without sacrificing the diagnostic accuracy of the images, which is no easy feat,” says Ahn. “We believe that our limited-slice CT scans achieve that balance.”

*This work has been performed in collaboration with Thierry Huisman and Aylin Tekes from pediatric neuroradiology and Mahadevappa Mahesh from medical imaging physics. Beatrice Mudge is the chief CT technologist for the new protocol.