A new study discovers biomarkers that predict brain damage in those with Alzheimer's. 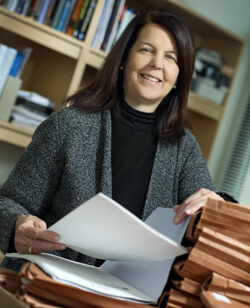 Marilyn Albert and her colleagues have identified biomarkers that could help predict who will develop Alzheimer’s characteristic cognitive impairment years before symptoms first appear.
photo by Keith Weller

Medications designed to stop brain damage that leads to memory loss in Alzheimer’s patients have thus far failed in clinical trials—possibly, many researchers say, because they are given to those who already have symptoms and too much damage. Finding biomarkers that can predict Alzheimer’s progression long before symptoms appear could give drugs more time to work and a greater chance of success, says Marilyn Albert, director of the Johns Hopkins Alzheimer’s Disease Research Center.

“Early treatments keep heart disease patients from getting worse, and the same may be true for those with presymptomatic Alzheimer’s,” Albert says. “But it’s been hard to see Alzheimer’s coming, even though we believe it begins developing in the brain a decade or more before the onset of symptoms.”

In a recent study, Albert and her colleagues say they are beginning to get the answers that biomarkers researchers have been waiting for. By measuring the relative amounts of the proteins phosphorylated tau and beta amyloid found in cerebrospinal fluid (CSF), they can identify whether someone is at increased risk of developing the cognitive impairment associated with Alzheimer’s years before the first symptoms appear.

For the new study, the team used CSF collected for the Biomarkers for Older Controls at Risk for Dementia project between 1995 and 2005, from 265 middle-aged healthy volunteers. Some three-quarters of the group had a family member with Alzheimer’s, a factor putting them at higher risk of developing the disorder. Annually during those years and again beginning in 2009, researchers gave the subjects neuropsychological tests and a detailed clinical exam.

They found that particular baseline ratios of two proteins—phosphorylated tau and beta amyloid found in CSF—were a harbinger of mild cognitive impairment more than five years before symptom onset. The rate of change over time in the ratio was also predictive. The more tau and the less beta amyloid found in the spinal fluid, the more likely the development of symptoms. The more rapidly the ratio of tau to beta amyloid goes up, the more likely the eventual development of symptoms.

Researchers have known that these proteins were in the spinal fluid of patients with advanced disease. “But we wondered if we could measure changes in these proteins when people were cognitively normal to give us some idea of when they might develop difficulty,” Albert says. “The answer is yes.”

Albert cautions that the ratio is not yet accurate enough to predict whether a particular individual will develop symptoms, and further analysis is needed.

However, she says, if the findings prove valid, they could guide the use of early treatments with drugs that become available and also help test new drugs by seeing if they alter the rate at which the proteins change over time.