A New Route for Skull Repair 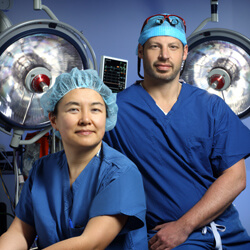 A number of patients who need urgent surgery for ruptured aneurysms, brain traumas, brain tumors, or other neurological injuries need to have a portion of their skull removed that’s later replaced, necessitating a second operation, a “cranioplasty.” That second procedure puts them at risk of adding insult to injury and may leave them looking significantly different in comparison to their presurgical appearance, says Johns Hopkins’ neurosurgeon Judy Huang. Replacing the portion of missing skull at a later date, which involves peeling back the scalp to expose the brain, may cause significant blood loss, can increase the risk of seizure, and sometimes leads patients to regress in their neurological recovery. In addition, the placement of bone or implant during cranioplasty reconstruction is often less than ideal, leaving an indentation in the temporal region that makes it obvious that a patient has undergone major brain surgery.

“It’s hard for patients whose lives we saved to say that they’re unhappy with the side of their head,” Huang says.

Though she and other neurosurgeons have been performing the skull replacement procedure in much the same way for more than a century, she adds, it was clear that there was room for improvement. So Huang and a group of neurosurgeons teamed up with Johns Hopkins’ craniofacial plastic surgeon Chad Gordon. With Huang’s support and guidance, Gordon developed a novel repair technique that could prevent further brain trauma and risk for infection, while also preserving the skull’s original appearance.

Rather than peeling back all five layers of the scalp, the new technique leaves the layer closest to the brain—the pericranium—attached, thereby preserving the brain’s protection and the pericranium’s blood flow. Working together to perform the second procedure, Huang and Gordon place either the portion of original skull or a custom bone-like implant between the pericranium and overlying layers of scalp instead of directly onto the brain.

This innovative procedure spares the brain from additional insult while leaving healthy layers of tissue sandwiched around bone or implant, which in turn prevents the replaced material from getting infected and additional surgery to remove it. “It not only creates a healthy environment around whatever material is used, but also prevents a necessary dissection around the brain, thereby leading to safer surgery,” Gordon explains.

In addition, he says, having the expertise of both a craniofacial plastic surgeon and neurosurgeon for the second procedure allows a more precise cranial reconstruction with better aesthetic results.

Huang and Gordon say this unique solution has most likely eluded neurosurgeons since the 1890’s because the skull replacement surgery is done primarily by the neurosurgeons themselves, whose training focuses mainly on the brain. The ability to work together in a multidisciplinary capacity as part of a newly formed clinic—the Multidisciplinary Adult Cranioplasty Center—has allowed Huang and Gordon to combine their knowledge to improve patients’ experiences.

They, along with several others including neurosurgeons Henry Brem, Jon Weingart, Michael Lim, Alfredo Quinones-Hinojosa and Geoffrey Colby, now see cranioplasty patients together in clinic before surgery, giving patients an opportunity to have both doctors answer all their questions and the surgeons a chance to jointly plan for each complex procedure.

“What we found is that adult patients are just as nervous for the aesthetic aspects of craniofacial reconstruction as they are for the lifesaving brain surgery,” Gordon says. “They don’t know how much of their hair will be saved, what incisions will be used, what materials will be used, and if sutures or staples will be present. Our team can reassure them of all of this in just a single visit, saving many patients from extra hassle and travel.”

After treating nearly 200 patients with this procedure, Huang says it’s clear that it offers significant benefits compared to the conventional procedure. “Our patients,” she says, “have been extremely happy with the results.”