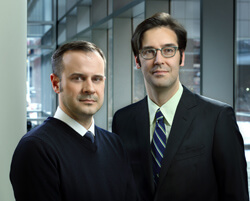 It’s no secret that most inpatients would rather not be at the hospital in the first place — and if they must be hospitalized, they hope to leave as soon as possible. However, the path to care is often full of countless twists, turns and delays that can extend length of stay.

Though some of these delays are unavoidable, say Johns Hopkins neurologists H. Adrian Puttgen and John Probasco, many of them could be prevented, allowing for in-hospital treatment in a more efficient manner without compromising care quality. That’s why they and their colleagues in the Department of Neurology recently embarked upon a study that has the potential to streamline care and shorten lengths of stay for patients across the hospital by eliminating unnecessary barriers and interruptions to care.

As proof of principle, the researchers studied patients with multiple sclerosis (MS) with exacerbations that required treatment with intravenous steroids, the standard of care for MS flare-ups. Such patients typically require care that involves a range of members across the department’s team: neurologists, nurses, physical therapists, occupational therapists, speech therapists and pharmacists, among others. While physicians usually have a goal for when such patients will be discharged, the vast majority missed this deadline, often by a day or more.

Hoping to move these patients through their stays more efficiently without sacrificing the quality of their care, Puttgen, Probasco and their colleagues developed a checklist of essential pieces of necessary care in the order that patients needed to receive them that members of the care team could refer to. They also developed a second checklist for patients and their families that allowed them to see when they’d be receiving certain types of care and highlighted which aspects of their care that patients themselves would be responsible for—such as making sure they had transportation back home upon discharge.

The researchers hope to study the effects of implementing similar checklists to streamline care for other groups of patients, such as those admitted for intravenous immunoglobulin and plasmapheresis. If results are promising, they say, other hospital departments may consider implementing similar checklists for their patients to streamline hospital stays.

“We’ve shown that it’s truly possible,” says Puttgen, “to increase the value of care by maintaining quality and increasing efficiency.”

A Johns Hopkins checklist was created listing the necessary care in sequence for patients with multiple sclerosis.

Before checklist: 12 percent of patients were discharged early

After checklist: 40 percent of patients were discharged early