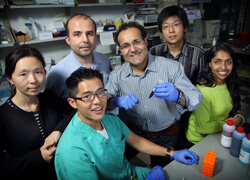 Despite many recent advances for patients with glioblastoma (GBM), the picture for this disease remains bleak. Though rare, GBM is still the most common and aggressive primary brain tumor in adults, killing patients in a median time of just over 15 months after diagnosis and treatment with surgery, chemotherapy and radiation. Without this care, survival time drops to just over four months.

Now, a recent study sheds light on one way that GBM cells gather strength to maintain their relentless onslaught—a target that could be exploited for future treatments.

The study, published in Molecular Cancer Research, focuses on an enzyme known as glucose-6-phosphatase (G6PC). Previous research has shown that cells of several other cancer types overproduce this enzyme, enabling them to use glucose at a rate up to 200 times higher than normal, healthy cells — a source of energy necessary for high rates of cell division and metastasis. Though abnormal G6PC production hadn’t been found in GBM, Johns Hopkins neurosurgeon and researcher Alfredo Quinones-Hinojosa was certain that it was present. So, he and his colleagues began searching for it in samples isolated from his own GBM patients.

By inhibiting G6PC production, the team found that these cancer cells were less viable and less able to migrate. The team also challenged glioblastoma cells — some with G6PC production inhibited, some not — with the glucose analog 2-deoxy-D-glucose (2DG), which previously had been shown to transform glioblastoma cells into a less malignant form, making them sensitive to other treatments. With G6PC expression unchecked, some of the glioblastoma cells could recover their malignancy after being challenged with 2DG and, in the lab, could move even faster than they had before. Dual treatment with 2DG and blocking G6PC expression, however, not only prevented those cells from recovering their malignancy but also killed them. Together, these findings suggest that G6PC could represent an important mechanism for making GBM so deadly and a pivotal weakness that researchers could attack to undermine this cancer.

The next step in turning this discovery into a treatment is to find a pharmaceutical method to inhibit G6PC expression in the brain. G6PC is naturally produced elsewhere in the body — including in the liver, kidney and pancreas — so while further studies are underway, any human trials are still years away. Because G6PC expression is shared by many cancers, however, the team’s discovery “is worth exploring in other cancers,” the authors write in their paper.