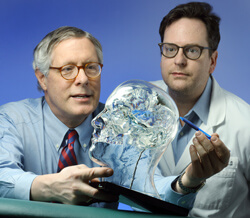 1 2
Gregory Bergey, left, and William Anderson now offer responsive neurostimulation therapy to control epileptic seizures—a treatment that was in clinical trials at Johns Hopkins and other sites, and was recently approved by the FDA.

About one-half of patients with epilepsy can attain seizure control with medication, but when that doesn’t prove successful, surgery to remove the seizure focus—the brain region triggering the episodes—can often render patients seizure-free. For some, however, surgery isn’t a viable option. Those who have more than one seizure focus or more than one in locations where removal would lead to neurological deficits, for example, aren’t candidates for the procedure.

In the past, these patients had few other options. Now, neurologist Gregory Bergey and neurosurgeon William Anderson offer a new treatment — responsive neurostimulation therapy — which recently gained U.S. Food and Drug Administration approval.

In clinical trials at Johns Hopkins and other sites for nearly a decade, this therapy is delivered via a device consisting of a small computer and stimulator, about half the length of a dollar bill and the thickness of a finger. Anderson can implant the apparatus in a recess carved out in the skull. Extending from the central unit are two leads ending in electrodes, which are placed through holes in the dura into the brain regions near the seizure foci, as determined by previous intensive monitoring studies.

Once activated, Bergey can tune the closed-loop responsive stimulator to detect epileptiform electrical activity from the seizure focus. It then delivers a brief electrical pulse through the leads that can cut a seizure short within a couple of seconds. Patients don’t feel the pulse, and many don’t even feel the beginning of the seizure, which never evolves further.

It’s still unclear exactly how this electrical stimulation stops seizures. However, says Bergey, it’s clear that it can do so in some patients. Clinical trials over the past several years have shown that the majority of patients who receive this device have an early reduction in their seizures that increases over time. Up to 60 percent of patients eventually have the number of their seizures cut in half. About 10 percent of patients eventually become seizure-free.

Though the stimulator requires periodic battery changes — how often depends on how frequently patients’ brain activity triggers a stimulating event — the neurostimulator requires no day-to-day maintenance or thought from patients. “It’s not like taking a pill, where you’ll have seizures if you forget,” Bergey says.

With the therapy now FDA-approved, the physicians say, Johns Hopkins is able to provide it for suitable candidates.

“It’s rewarding to be able to offer this very effective option,” says Bergey, “for patients who have few options left.”