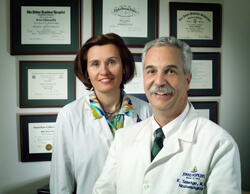 Hemorrhagic strokes make up just a small minority of strokes in general, accounting for just 15 percent. But these brain bleeds are responsible for far more than their fair share of morbidity and mortality, causing about 40 percent of stroke deaths and often significant disability for survivors. Hemorrhagic strokes can occur in any compartment of the brain, from the subarachnoid space to the parenchyma to the ventricles. Though each type of brain bleed has its own peculiarities with unique consequences, clinician-scientists, including Johns Hopkins neurosurgeon Rafael Tamargo and neurocritical care specialists J. Ricardo Carhuapoma and Wendy Ziai, say that new research and ongoing studies are providing a better understanding of hemorrhagic strokes and new ways to treat these conditions that are not only saving lives but helping patients recover more fully.

Subarachnoid hemorrhages (SAHs), in which bleeds occur in the fluid-filled space where the brain floats, are typically caused by aneurysms, Tamargo explains. “Usually patients are going about their regular routine, and all of a sudden it feels like a bomb goes off in their heads,” he says.

The most critical treatment for SAH, Tamargo says, is to block the aneurysm to prevent further bleeding. The gold standard continues to be an open craniotomy to clip the aneurysm, a procedure developed at Johns Hopkins in the 1930s. However, new endovascular techniques are providing ways to treat aneurysms with minimally invasive surgery through placing coils or stents that block blood flow. More recently, Johns Hopkins has served as a trial site for new generations of flow diversion devices, Tamargo adds, which promote thrombosis in the weakened section of blood vessel and allow the parent vessel to remodel itself to permanently occlude the aneurysm.

When bleeds occur elsewhere in the brain, says Ziai, treatment is less straightforward. Other than controlling blood pressure, intraparenchymal strokes have no treatment that’s proven better at improving outcomes than supportive care. And for bleeds in the ventricles, she adds, external ventricular drains alone haven’t dramatically improved patient morbidity or mortality.

Ziai is currently co-principal investigator for the MISTIE-III and CLEAR-III trials, which are using a new method to improve outcomes for patients with intraparenchymal and intraventricular hemorrhage. In both trials, patients undergo minimally invasive surgery to insert a catheter through a bore hole that delivers recombinant tissue plasminogen activator directly into clots that form in either the parenchymal tissue (MISTIE) or ventricles (CLEAR). Earlier iterations of these studies have shown promising results not only in saving patients’ lives but also their functionality after these types of strokes.

Carhuapoma, who is also involved in these studies, was an investigator in a related study, the SLEUTH trial, which published results in 2011. There, he and other researchers found that adding ultrasound to these efforts can speed clot lysis and evacuation.

“Our best current therapies are still associated with very high mortality and morbidity rates,” says Ziai. “By having something else to offer, we might begin to make true differences in patients’ outcomes.”