Doing No Harm for Ischemic Stroke 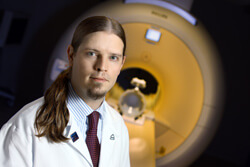 Tissue plasmogen activator (tPA) has been a lifesaver for thousands of ischemic stroke patients over the past decade. When this clot-busting drug is administered intravenously within 4.5 hours after stroke onset, patients are significantly more likely to survive and even have a full recovery.

However, says stroke neurologist Richard Leigh, only a minority of patients qualify for tPA now using current guidelines. Because most people who’ve had an ischemic stroke arrive for treatment past the time frame when tPA is considered effective and safe, the vast majority of ischemic stroke patients must undergo more aggressive treatments, such as pulling the clot out mechanically through a catheter threaded from the groin or directly injecting tPA into the brain—procedures that, while effective, come with significant risks.

That’s because the longer a stroke goes on, Leigh explains, the more damage occurs to the blood-brain barrier, the unique shielding of blood vessels that limits the passage of molecules from the bloodstream into the brain. Once this security system has been breached, tPA use might cause hemorrhaging in the brain. In fact, roughly 6 percent of patients treated with tPA within the optimal window still have hemorrhaging because their blood-brain barrier has already sustained too much damage.

“We want to help patients, but we need to make sure our treatments don’t make things worse,” Leigh says.

To help solve this conundrum, Leigh and his colleagues recently developed a new way to characterize blood-brain barrier damage in ischemic stroke patients through a novel way of looking at standard MRI scans. Before they undergo aggressive procedures to remove clots, stroke patients traditionally receive MRIs to estimate the risks and benefits of the recommended approach. The researchers developed novel software that uses these MRI images already taken and overlays them with calculations that more precisely measure blood-brain barrier damage, allowing them to get a better estimate of which patients would benefit from tPA, even after the recommended treatment window.

Though Leigh says more research is needed before this software enhancement can be widely implemented, he and his colleagues recently published proof of the concept in the journal PLOS ONE. Their findings show that the software identified varying levels of damage in nine stroke patients already known to have suffered a blood-brain barrier insult. The researchers are now examining results from a larger patient group to better define the meaning of these variations and how physicians can use this information to choose the best treatment.

“It’s a personalization of medicine,” Leigh says. “Rather than lumping everyone together, we can figure out—on a case-by-case basis—who should and who shouldn’t get which treatment. In the long run, we can increase the number of patients we can help and decrease the number who have complications.”