Winning the war on collateral damage 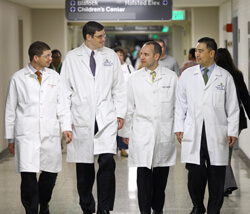 When Daniel Sciubba talks about traditional neurosurgery, he evokes images of war: dismantling the South in the Civil War, spraying with Agent Orange in Vietnam, bombing raids in World War II. These efforts didn’t directly knock out the enemy, but they did cause a lot of collateral damage.

“In traditional, open surgeries to remove tumors,” he says, “we can cause a lot of collateral damage as well. Sometimes, there’s no way around it. But there’s often a better way to get the job done.”

Sciubba often considers whether a minimally invasive approach might be an option when removing spine tumors. In the past, even small tumor resections necessitated making large incisions, removing muscle, drilling away bone, and inserting screws, rods and other hardware to stabilize the spine. In a recent operation that Sciubba and his colleagues performed to remove a schwannoma growing between a patient’s vertebral pedicles, they were able to make a significantly smaller incision, avoid major cuts to the muscles and completely preserve the bone without installing any hardware. The patient went home on postoperative day one, rather than on the fourth day that’s typical with an open procedure.

Sciubba’s colleague Jean-Paul Wolinsky agrees that minimally invasive surgeries can avoid many of the complications of traditional techniques. Take the odontoidectomy, the operation to remove the process on the C2 vertebra in patients who develop a basilar invagination. When performed via the typical transoral approach, the procedure carries about a 25 percent risk of meningitis from the cerebrospinal fluid becoming contaminated with oral bacteria.

Ten years ago, Wolinsky had a new idea: Why not access the odontoid through the neck instead, using a technique similar to the one for placing odontoid screws for fractures? He had recently developed a new retractor for placing screws that could be repurposed for odontoidectomies. After proving the surgery was feasible with cadavers, he’s since performed 22 minimally invasive odontoidectomies through the neck.

“As we do more and more minimally invasive techniques,” Wolinsky says, “we get more creative ideas.”

Hopkins neurosurgeons are also taking advantage of natural orifices for entryways. In the past, pituitary tumors, cerebrospinal fluid leaks, encephaloceles or skull base tumors were typically accessed through the face or skull, requiring large incisions with the resulting facial scarring. Now, Gary Gallia and his otolaryngology colleagues perform many of these procedures working directly through a patient’s nostrils.

Minimally invasive surgeries aren’t just limited to adults. Pediatric neurosurgeon Edward Ahn uses a minimally invasive technique for procedures to correct craniosynostosis. In the past, this surgery universally required an ear-to-ear incision. Blood loss was typically significant, requiring transfusions. Because of the risk involved, doctors usually waited until babies were at least 6 months of age so they could tolerate the procedure better.

In the vast majority of procedures Ahn now performs, he makes just two small incisions at the front and back of the prematurely fused skull suture to remove the abnormal bone, allowing the head to be reshaped over time with a helmet. Rather than needing a five-day hospital stay after the operation, Ahn says, babies typically stay just overnight. Most never need a single transfusion.