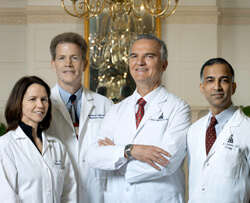 For many doctors, the diagnosis of normal pressure hydrocephalus (NPH) remains a controversial one. Its triad of symptoms—abnormal gait, cognitive decline and incontinence—might have any number of causes having nothing to do with a buildup of cerebrospinal fluid, including other movement disorders, dementia and simple aging. However, for neurologists Abhay Moghekar and Richard O’Brien, geriatrician Sevil Yasar, and neurosurgeon Daniele Rigamonti, proof for NPH is incontrovertible in the videos they take before and after they deliver treatment for this condition. In one typical pretreatment video, an elderly male patient is asked to take a short walk down a hall and around a marker on the floor. Though a simple task, it’s clear the patient can barely manage. His feet seem leaden, barely clearing the floor with each tiny step.

In the post-treatment video, the patient’s turnaround is unmistakable. He strides confidently, with no sign that anything was ever amiss.

“I would describe myself as a skeptic,” says O’Brien, “but having seen enough patients now, there are clearly many who do incredibly well after treatment. The issue is correctly diagnosing those patients so they receive the correct care.”

Understanding whether NPH or some other cause is at fault can be tricky, adds Moghekar, but it’s a strong suit at Johns Hopkins. He, O’Brien, Yasar, and Rigamonti take a team approach. They evaluate these patients together using a number of criteria, including MRI images, which need to show enlarged ventricles, and the patients’ performance on movement and cognition tests. Every Monday, the team holds a conference—similar to cancer tumor boards—to discuss each patient’s particulars and the next steps.

One of the most important determinants is how patients perform after cerebrospinal fluid is removed, through either a large volume spinal tap or prolonged drainage over two to three days while the patient remains at the hospital.

The results from this test are often clear-cut, Rigamonti explains. “Either the patient has a response—better gait, better cognition, less incontinence—or no response,” he says. “Those who respond become candidates for surgery. We know this group of people will benefit from a permanent shunt.”

Though the causes of NPH remain hazy, shunts that drain excess cerebrospinal fluid are the standard solution. Rigamonti and his colleagues have placed hundreds of shunts in NPH patients over the years, with dramatic results for the vast majority.

The job isn’t over once the shunt is installed, though. “We don’t just put the shunt in and say, adios, good luck,” Moghekar explains. “We see patients at two weeks, six weeks, 12 weeks, six months and a year after surgery. If things are going well, we see them annually after that. Strict follow-up is an important part of our care.”

He and his colleagues believe that such comprehensive diagnostics, skilled surgery and follow-up are the reasons why their NPH patients are often able to avoid nursing homes, a fate typical for those with this disease who remain undiagnosed and untreated. “It’s one of the few cognitive and movement disorders that are reversible,” Moghekar says. “If you make the right diagnosis and deliver the right treatment, you can make a huge difference in these patients’ quality of life.”

In addition to diagnosing and caring for patients with NPH and related disorders, each member of the hydrocephalus team is fully engaged in research efforts to improve diagnosis and care for patients with NPH and other memory disorders. “When patients come to Johns Hopkins,” says Yasar, “they not only expect the best care, but they also expect their physicians to be the world leaders in understanding these disorders and developing new treatment approaches. That is why we love our work.”