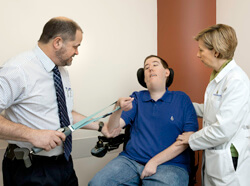 Testing patients’ strength is one method that Tom Crawford and Charlotte Sumner say can show whether experimental drugs for spinal muscular atrophy are effective.
photo by Keith Weller

Just two decades ago, doctors had little knowledge of what causes the degenerative neuromuscular disease known as spinal muscular atrophy (SMA)—or how to help patients who have it. Today, however, research is making almost daily progress, says pediatric neurologist Tom Crawford.

“We’ve gone from SMA being one of the most hopeless of all neuromuscular diseases,” Crawford explains, “to having a biological hypothesis that we think can make a big difference.”

Crawford and adult neurologist Charlotte Sumner have both been treating SMA patients for years. In 1995, the field got a big boost when researchers discovered that SMA is caused by mutation of a gene known as survival motor neuron 1, or SMN1.

The severity of the disease depends on another, almost identical gene known as SMN2. The copy number for this gene naturally varies from one to four. Since SMN2 can replace many of the same functions as SMN1, patients who have more copies of the SMN2 gene have less severe forms of SMA.

“Therein lies the hope,” Crawford says. “There aren’t too many genetic diseases in which there’s a replacement gene already in the genome. We just need a way to make SMN2 work better, instead of figuring out how to put a new gene in.”

That’s one of Sumner’s goals. Hoping to find ways to thwart SMA, she and her colleagues are conducting a variety of ongoing investigations into the molecular mechanisms behind it. Many of their studies rely on a mouse model in which the animals’ own endogenous SMN gene is knocked out and replaced with a deficient copy number of human SMN2. These animals display many of the characteristics of SMA seen in patients, including more weakness in the lower limbs than the upper ones, wasted intercostal muscles and relative sparing of the diaphragm.

The animal model has shown that if there’s ample SMN protein, the mice can be rescued from the disease—giving hope that improving SMN2 function in people might reach the same goal. That’s why Sumner’s lab is working on indentifying small molecules that might be able to raise SMN2 output. They’ve identified some promising candidates that they’re now testing in an animal model.

When the time comes to test these potential new therapies in clinical trials, Crawford and his team will be prepared. They are currently developing the best protocols to evaluate SMA severity by muscular strength, as opposed to function, the traditional way of evaluating patients in SMA clinical trials. Many patients can find workarounds for functional deficits, he explains, so strength may be a better way to see if a drug really has a positive effect on patients.

“This has been an incredible ride,” Crawford says. “We’re so lucky that we get a chance—here and now—to see this disease make a turnaround.”