NeuroLogic - A pacemaker for the brain

A pacemaker for the brain 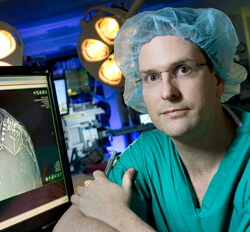 William Anderson is an accomplished neurosurgeon, but it wasn’t until after he’d earned his doctorate in physics that he realized his real calling was to play a hands-on role in helping people.

“I wanted to come up with some way I could apply physics to medicine,” he says.

So, he went to medical school.

During his residency, he spun his background into one of the most physics-oriented fields of neurosurgery: treating epilepsy. Today, one of Anderson’s main interests is an electrical device known as NeuroPace that short-circuits seizures by detecting abnormal electrical patterns in the brain, then delivering a disrupting pulse. This device is now in clinical trials and is expected to receive FDA approval soon.

Though researchers still don’t completely understand the mechanism behind epilepsy, Anderson says, it’s clear that it’s a problem with neurocircuitry involving electrical connections between neurons. This problem might result from a familial cause or from scarring, and it happens most often in the temporal lobe. When normal electrical activity goes awry in regions of the brain, it can lead to the uncontrollable arm and leg movements and loss of consciousness and speech that occur during an epileptic seizure.

Many patients can be successfully treated with medications. However, a minority don’t respond to even multiple drug trials and require operations such as temporal lobectomies. But what if surgery isn’t feasible?

“A lot of the time,” Anderson explains, “seizures originate in a pivotal area of the brain. If you take out the seizure focus, that patient might lose motor function or speech, so surgery simply isn’t an option.”

That’s where NeuroPace comes in. The device consists of a processor about the size of a cell phone, with one or two wires extending outward that terminate in electrical contacts. After patients undergo extensive brain mapping to identify the seizure focal points, neurosurgeons can install NeuroPace, drilling a window in the skull to accommodate the processor and placing the contacts through the dura and onto the seizure foci.

Each contact touches between 60,000 and 100,000 neurons. When abnormal electrical activity occurs in these areas, NeuroPace senses it through the electrical contacts and delivers a competing burst of electricity through the same route. It’s unknown exactly how the device cuts the seizure rate—the depolarizing signal seems to put neurons in a brief refractory state where they can’t fire, which might reset the electrical signal into a normal pattern—but it’s clear that it does. In clinical trials of the device, in which Anderson and his Johns Hopkins colleagues participated, 47 percent of patients had their seizures cut by half.

Anderson and his colleagues are now working to optimize the algorithms for detecting seizures, a factor which could eventually improve the predicting capabilities of NeuroPace. Once this device is FDA approved, they expect to begin installing them immediately into patients.

“This device,” he says, “is going to open a whole new option for epilepsy patients who have few options left.”