NeuroLogic - Gamma Knife: It's More than Nerve-Zapping for TN

Gamma Knife: It's More than Nerve-Zapping for TN 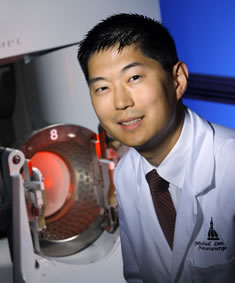 Neurosurgeon Michael Lim has made the gamma knife a specialty.

A living hell. The suicide disease. Clinicians with even a passing knowledge of trigeminal neuralgia know that, for most untreated patients, life as they know it stops when the facial agony begins. The repeated episodes, the intense pain — dubbed lancinating and shock-like — “are broadly debilitating,”says Michael Lim, a neurosurgeon with the Johns Hopkins Trigeminal Neuralgia Center.

Therapies for trigeminal neuralgia are equally broad — a result of its persistence and the need to treat mostly older patients who suffer a variety of comorbidities. So the Center offers percutaneous approaches, using glycerol, for example, to quiet an irritable trigeminal nerve. And either Lim or neurosurgeon Ben Carson perform gold standard microvascular surgery to relieve pressure on it.

But it’s the newest treatment at Hopkins, the gamma knife, that’s come into its own. The advantages of gamma knife radiosurgery (GKR), which concentrates ionizing radiation at a trigeminal nerve root target, are clear. “It’s minimally invasive,” says Lim. “If you’re working the day before you came in, you can work the day after. You can have dinner that night with your family.” Complications are low and the most common one — localized numbness — can itself be a relief, patients say.

GKR is ideal for those who are frail or anti-surgery. “Also,” Lim adds, “it gets around the hazard of surgery for patients on coumadin or other anticoagulant therapy.” About 30 Center patients have the procedure each year.

Yet it’s Lim’s experience with GKR and the way his earlier evidence-based research shapes his practice that’s put the therapy at Hopkins on a par with traditional decompression surgery for initial relief. “We’ve watched our successes go up,” he says, “and the two are comparable.

“It’s not simply zapping the nerve with radiation,” he adds. It’s an art to get the beam placed, its dosage and the length of nerve radiated just right. “Some studies show that the nearer you can safely go to the brainstem, the better the result. In general, we aim 3 to 4 millimeters in front.” And how much nerve to treat? Lim’s research suggests 6 millimeter segments shorten the time to pain control.

The initial work up also figures into the successes. The high-contrast, high-resolution MRI approach — FIESTA sequences — allow Center clinicians to image brainstem arteries in all their tiny, nerve-encroaching detail. That not only sharpens trigeminal targeting but helps tell if radiosurgery’s appropriate.

The down side of gamma knife therapy is the relatively long time for pain relief to become complete — six to 10 weeks — as radiated trigeminal axons and myelin shut down. “And though the treatment’s durable,” Lim says, “there’s still a 50 percent chance at least some pain will recur in five or 10 years.” Lim’s fine-tuning lessens that, but only so far, a fact that drives him to the lab. What’s ideal, he says, would be something that sensitizes the nerve to radiation — that and something to make normal tissue nearby less vulnerable.

Meanwhile, Lim says, the Center sticks to its motto: Leave no one in pain. “We offer all the therapies that are out and we really tailor them to the patient.”