NeuroLogic - When ALS Trials Are No Trial

When ALS Trials Are No Trial 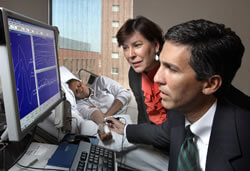 Has the patient’s nerve conduction changed? Clawson and Maragakis carry out a trial’s protocol.

‘‘I can’t stress enough how important it is to get people with ALS into the clinic early in the disease,” says neurologist/neuroscientist Nicholas Maragakis. “You see patients who’ve been bounced around. Their charts read “suspicion of ALS”  but then three months pass and three more. And, at entry, they’re in worse shape than we’d like.”

With an incurable disease, one where early diagnosis is often equivocal, asking Why the hurry? seems defensible. But for two reasons, it’s not. Hopkins’ ALS Multidisciplinary Clinic has existed for years and, due, in part, to Director Lora Clawson’s unwavering insistence on consummate care, early entry patients tend to keep function longer with a higher quality of life. Studies on patients in large academic centers underscore that.

And, increasingly, those with ALS benefit from closeness to clinical trials. Even though no solidly therapeutic ALS drug has surfaced, results of Hopkins’ best practices studies, for example, reach its patients’ bedsides faster. That includes a recent look at earlier use of forced ventilation —BiPAP—showing it can prolong life roughly a year. That result has already changed clinical practice. The same holds for gastrostomy tube feeding: Earlier use improves survival.

“Even the negative studies help,” says Clawson. When preclinical work with the antibiotic minocycline looked interesting enough that ALS patients nationwide asked their physicians for the drug, trials at Hopkins and elsewhere showed it was a dangerous option.

Each year, some 50 percent of ALS patients join trials at Hopkins, most likely a high among academic medical institutions. “We seem to be running a considerable number of human studies,” says Maragakis, “and their breadth is exceptional—drug therapy, genetics, even stem cells.”

Well-run research stems in no small measure from input that Clawson and colleague Richard Kimball offer on patient/subject aspects of the protocol, including who’ll participate. “Some studies are more patient-burdensome than others,” says Clawson.  “If, for example, someone 200 miles away has to travel to Baltimore four separate times for lumbar punctures, that’s a lot to ask, even though the person’s willing.”

“Clinical research is a partnership between researcher and clinic experts from the get-go,” says Maragakis, “and the benefits are real.”

Current or upcoming trials include:

A trial of the safety and tolerability of a ketogenic diet, as originally developed at Hopkins for intractable epilepsy. The high-fat options may be neuroprotective.

Study of a muscle-injected factor that turns on genes for the protective growth agent VEGF. Trials of the substance are already ongoing for diabetic neuropathy.

A study to answer the question: Is endurance or resistance exercise helpful in ALS?

A Phase II trial of a chemical that’s the mirror image of pramipexole, a drug for Parkinson’s disease. Unlike the Parkinson’s drug, the new agent doesn’t affect dopamine receptors,  an unwanted effect, but it may protect motor neurons.

A trial to see if conditioning patients’ diaphragms via stimulating electrodes will slow respiratory decline.

To refer a patient to the Johns Hopkins’ ALS Multidisciplinary Clinic: 410-955-8511
Info: http://hopkinsneuro.org/ALS/clinical_trials.cfm