NeuroLogic - The Little Window Before Dementia

The Little Window Before Dementia 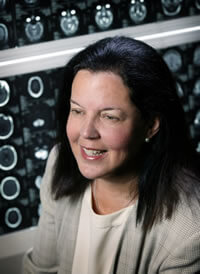 To say that much of Marilyn Albert’s research aims to keep Big Pharma happy sounds a bit suspect until you realize that doing so could be best for the Alzheimer’s disease patients she wants to help.

Time is short to remedy an illness that threatens baby boomers worldwide. Only three of the existing AD medications—the cholinesterase inhibitors—seem to treat disease symptoms early on, and then only minimally. And though a wealth of Alzheimer’s biology fills journal pages, especially on the amyloid and tau proteins of its hallmark plaques and tangles, why the proteins so exquisitely target specific brain regions is still a black box.

For cognitive neuroscientist Albert, the best approach, she and colleagues agree, is to run clinical AD research and basic science in parallel. And within the clinical studies, focusing on its earliest stages makes most sense. “If more effective treatments are coming,” she says, “we obviously want to be able to intervene early. Even mild AD brings great dysfunction. And there’s the worry that new treatments might fail in well-established disease.”

There’s been a glitch, however, one tied to pharmaceutical companies whose expertise and high-volume techniques make them key partners in therapy. A few years ago, Albert explains, “pharma got burned.” They’d invested hugely to test very mildly impaired patients’ response to promising drugs—the benchmark being an ability to block the shift to full-blown AD. Unfortunately, says Albert, “no one was sure how to identify people on the cusp of progressing from mild cognitive impairment (MCI) to dementia.” So most of the studies couldn’t show if the drugs made any difference.

In response, Albert joined teams bent on clarifying those early stages—even before the term “MCI” was coined—and distinguishing them from normal aging. One study, for example, used imaging to show that atrophy of memory areas—both hippocampal and entorhinal cortex—quickens in people bound for dementia. So does their rate of decline on specific cognitive tests.

From these studies, something else stood out. From autopsies, Albert explains, “we began to see that Alzheimer’s biology can set in even when people are healthy: Some 25 percent of cognitively normal folks meet pathology standards for AD!” So her teams shifted their focus even earlier. Albert’s trying to learn who’s at risk among the still-cognitively healthy. Her recent work shows a telltale lagging on memory tests—after a retrospective look at those who became ill.

“My conclusion is that no one measure—not cognitive testing, amyloid imaging or sampling cerebrospinal fluid—is yet useful enough for single patients. We probably need a combination to tell who among the cognitively normal will likely progress to mild impairment.

“But if we can spot people in that little window before nerves are lost, that makes it the most worthwhile thing we can learn to do just now.”