NeuroLogic - Skull Base Surgery: When Smaller Is Better

Skull Base Surgery: When Smaller Is Better 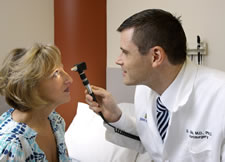 High school math teacher Sue Cheatham visited her ophthalmologist for a pre-Lasik consultation because she’d had enough of “vision like bad satellite dish TV, where bits would black out, then reappear.” Instead of suggesting Lasik, he sent her to a neuroophthalmologist, who said her disrupted lateral sight—bitemporal hemianopsia—signaled a brain tumor. The MRI to follow suggested a craniopharyngioma.

Cheatham’s reduced field would never be restored, she was told; only immediate surgery might save the rest. Shaken, she made her way to a regional medical center where the subfrontal craniotomy offered for her skull base tumor was reasonable but recovery would be slow, given the approach and extent of brain retraction. That and the extended scar concerned her. But, again, it was the conviction that she’d lose her sight that made her look elsewhere.

Even if the growth were benign, says Cheatham, who describes herself as goal-oriented, “the prospect of being newly-blind at 49 and not able to work was horrible.” When neurosurgeon Gary Gallia phoned—he heads Hopkins’ endoscopic skull base surgery—Cheatham’s eagerness was obvious: She took his call in front of her very quiet, oh-so-interested math class

Fortunately, the nature and position of the tumor made her a candidate for the expanded endonasal approach that’s a Gallia specialty. Though experienced in open-brain skull base surgery—he trained under Donlin Long at Hopkins—Gallia is also certified in minimally invasive endoscopic neurosurgery. He completed an intensive fellowship under Australia’s Charles Teo, a pioneer in the field.

The transnasal routes have drawn attention these last five years,” says Gallia. Entry through the nose and large sinuses provides a wide surgical corridor. “And coming from below to work from the inferior aspect of the tumor,” he explains, “means little if any need to retract the brain.” The endoscope’s wide field of view and high illumination clarify tumor margins.

Optimal tumor type varies, he adds, but any that involve the ventral skull base are fair game. Pituitary growths are most common, though Gallia sees meningiomas, Rathke’s cleft cysts, chordomas, chondrosarcomas, CSF leaks and many other pathologies. In addition, he uses the endoscope with a small craniotomy to resect brain tumors transcranially.

Patient recovery time is typically far shorter. One patient with an esthesioneuroblastoma went back to work a week after surgery rather than the traditional month. With the transcranial approach for that tumor, 25 percent of patients have CSF leakage or other complications, some studies say. Gallia’s not seen that with the endoscopic technique.

Part of the benefits stem from the way the technology itself heightens surgical teamwork: like a fighter pilot and co-pilots in the cockpit, some say. “That comes close,” Gallia agrees. ENT surgeons Douglas Reh and Masaru Ishii open the sinuses and later close that path, with all sharing time at the endoscope and surgical tools. Blood-filled vascular emergencies aren’t unheard of in skull base surgery, says Gallia, “but having two work as one ensures our constant visibility.”

As for Cheatham, after her golf-ball sized craniopharyngioma was removed, her sight—to everyone’s joy—fully returned. “And I can also see my future. I’ve just enrolled in nursing school,” she says. It’s postsurgical double vision of the best sort.

For more information, contact the Johns Hopkins Skull Base Tumor Center at 410-614-0585.