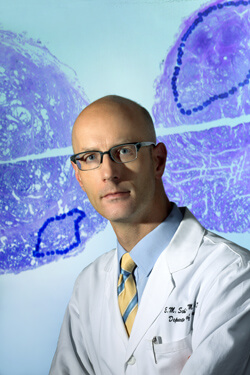 Why should men of African ancestry take prostate cancer very seriously? Ted Schaeffer, (former) director of Johns Hopkins’ prostate cancer program, who has made key discoveries that have important clinical implications for these men, is glad you asked.

African-American men often present with more aggressive cancers than other men. For example, says Schaeffer, “if you’re seeing an African-American man who’s been diagnosed with Gleason 6 disease, you can definitely advise him that he has a one-third higher chance of having more aggressive cancer than the biopsy suggests.” Also, “we found that when these men have surgery, they have a higher likelihood of needing additional adjuvant treatment.” These findings, published in Urology, were based on the outcomes of more than 17,000 men who underwent radical prostatectomy at Johns Hopkins; 1,650 of them were of African ancestry and were not only more likely to have higher-grade cancer and larger tumors, but to experience recurrence of cancer compared with Caucasian men.

Schaeffer initially observed that African-American men who could be candidates for active surveillance turned out to have a much higher chance of having aggressive disease if they later needed surgery. “We validated in our surveillance cohort that the chance of failing surveillance or being reclassified is 30 percent higher for black men compared to white men. We also found that even after surgery, if you control for the grade and stage of the cancer, men of African ancestry are more likely to have their cancers come back.”

The findings suggest that African-American men with prostate cancer make less PSA per gram of cancer tissue than other men. “There are fewer early warning signs,” says Schaeffer. Another key difference, he discovered, is location: African-American men tend to develop anterior tumors, at the top of the prostate, an area that’s harder to sample for a standard biopsy. All high-risk and African-American patients at Johns Hopkins get an MRI-guided biopsy.

Schaeffer also directs Johns Hopkins’ prostate cancer multidisciplinary clinic. “We have world expertise in treating high-grade, high-risk prostate cancer, and also very rare forms of prostate cancer, like prostate sarcomas.” The bottom line, he says, is “if a man has aggressive, high-risk cancer, if we really go after it with multimodal treatment, we can still get a cure.”