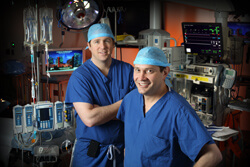 1 2
Chris Wolfgang, right, and Matthew Weiss are one of less than a dozen teams in the U.S. using IRE for pancreatic cancer.

During irreversible electroporation, treatment options that were considered impossible are revealed.

A few of the medical centers that provide IRE in the U.S. use a percutaneous technique, but Wolfgang and Weiss prefer a laparotomy. Under intraoperative ultrasound guidance, the surgeons work together to insert several probes through the transverse mesocolon and into the tumor. These send short, high-voltage pulses to the tissue to create cell membrane permeability, which then induces cellular apoptosis.

“We irreversibly poke holes in the cell membrane of the cancer tissue. The cells suck in water and then they die,” says Weiss.

Unlike thermal ablation techniques, which deliver thermal energy that can dissipate from the tumor to the major blood vessels, Weiss says IRE is safe to use around blood vessels and even bile ducts. “Collagen and other structures are not affected by IRE.”

Since the duo started providing this therapy, they’ve had some unintended results. “Once we get a laparoscopic view of the tumor during IRE, we find that 80 to 90 percent of them are actually resectable,” says Weiss. “It seems the preoperative cross-sectional imaging overestimated the burden of disease; for example, the tumor may have originally appeared to be too close to major blood vessels, but we were actually seeing dead lymphatic tissue or the effects of chemo and radiation.”

“IRE is getting people to surgical resection who wouldn’t have been candidates before,” says Weiss.

The Verdict on IRE as a Stand-Alone Treatment?

For patients who receive irreversible electroporation only, recovery takes less time than a resection or a resection and margin augmentation. To determine the effectiveness of the procedure, Chris Wolfgang and Matthew Weiss are following their patients for two to three years.

“The big hope is that we are going to find it is very effective in killing tumors for good,” says Weiss. In the meantime, “Patients with locally advanced pancreatic cancer now have another option for treatment.”