A Highlight for Minimally Invasive Esophagectomies 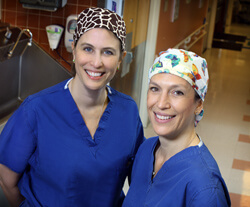 A top priority for Daniela Molena, right, and Anne Lidor is to avoid any complications with esophageal surgery.

Treatment for esophageal cancer is not what it used to be. “Ten years ago, we would remove the esophagus when we heard the words cancer or high-grade dysplasia,” says Daniela Molena, director of minimally invasive and robotic thoracic surgery. “We don’t do that anymore.”

Today, Molena and Anne Lidor, director of upper gastrointestinal surgery, turn to several minimally invasive techniques: ablation to burn or freeze dysplasia or early-stage cancer, an endoscopic mucosal resection to remove an early-stage tumor, and, when necessary, a minimally invasive esophagectomy (MIE) to remove part or the entire esophagus affected by a more advanced cancer.

“MIE allows us to complete the same task as open surgery, but the incisions are smaller,” says Molena. “Patients have less pain, faster recovery time and fewer complications.”

The problem of ansatomic leaks

Despite the benefits, Molena says some of the complications are comparable to those after a traditional esophagectomy. One of the most serious is a postoperative anastomotic leak where the remaining esophagus is reconnected to the stomach.

“When we see a pink stomach during surgery,” says Molena, “we might assume it has good blood flow, and we connect that area of the stomach to the esophagus. But if the blood flow is not sufficient to keep the tissues alive, the suture line can fall apart a few days later.”

To reduce the chances of an anastomotic leak, Molena and Lidor are testing fluorescence imaging. After injecting the patient with a fluorescent agent, a special camera intraoperatively captures the highlighted areas in the stomach, which represent areas with healthy blood flow.

Now, Molena says, “We can distinguish the part of the stomach that is well vascularized.”

With this approach, Molena and Lidor are optimistic that there will be fewer complications after surgery from the destruction of sutures. “We also think that in the future, we might be able to one day link a fluorescent agent to a particular cancer-related molecule,” says Molena. “Surgery could then be targeted to the tumor or an exact lymph node.”

Meanwhile, Molena says the treatments at The Johns Hopkins Hospital are achieving five-year survival rates of 80 to 90 percent for early-stage esophageal cancer patients and up to 50 percent for advanced-stage patients.

“What we can offer today,” says Molena, “is very different compared to what was available even five years ago.”