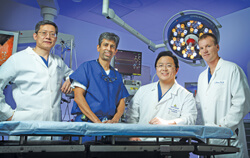 Many patients with chronic pancreatitis live with debilitating pain for years before being diagnosed. Some are unable to eat and are dependent on IV nutrition. After diagnosis, they may see a host of specialists in attempt to control the pain.

When medical therapy for pancreatitis fails, many patients turn to surgery to remove the pancreas. The major benefit is to eliminate or control pain, although previously surgery was a last resort because all patients developed diabetes.

Now patients have the option of a laparoscopic total pancreatectomy with islet autotransplantation, in which living islets from the damaged pancreas are isolated and reimplanted by surgeons into the liver. “The procedure is 90 percent effective in relieving chronic pain,” says Marty Makary, director of the Johns Hopkins Pancreas Islet Transplant Surgery Center. In the majority of patients, the islets maintain function to either prevent or ameliorate the diabetes that typically results after total pancreatectomy.

Because the pancreatectomy with islet autotransplantion can be done laparoscopically, the operation results in less perioperative pain, reduced wound infections, faster recovery and shorter hospital stays compared with traditional surgery. Patients remain in the hospital for about a week for their postoperative recovery, which includes pain evaluation and blood sugar monitoring. Surgeons Makary and Kenzo Hirose pioneered the operation at Johns Hopkins, presented their new technique at national medical conferences, and, to date, have performed the most of these laparoscopic operations in the world.

“The worst case scenario is that the patient develops insulin-dependent diabetes,” says Hirose. “But if trading one problem for another, pain for diabetes, most of our patients would take that trade.”

One key, Makary says, is knowing when to perform the operation. The nature of chronic pancreatitis means the islets are perpetually being injured. If the disease progresses too far, there’s nothing to transplant. Because of this, the team at Johns Hopkins closely evaluates patients.

In the first part of the operation, surgeons use five or six small incisions to remove the pancreas laparoscopically through the belly button. Then the islet transplant lab team, led by Dan Warren and Zhaoli Sun, treats the pancreas with collagenase to break down the tissue and uses an isolator to separate the pancreas into its different tissues—islets, ductal tissue and exocrine tissue. Once the islet tissue is released, the enzymatic process is stopped, and the digested pancreas tissue (including the islets) is injected via the portal vein into the liver.

The team retrieves and transplants the islets during the procedure in the operating room rather than
transporting the pancreas to a lab. A good harvest is critical, as transplanted cells no longer reproduce. This innovation reduces the time of the procedure, decreases the amount of time the pancreas is left on ice and potentially preserves functioning islet cells.

“Once the islets are injected into the liver, they become embedded and begin producing insulin almost immediately,” says transplant surgeon Niraj Desai. “Generally patients receive insulin for about a month to allow the islets to rest.”

Patients are then weaned off of insulin. About one-third of patients require no further insulin, about one-third need small amounts and about one-third continue to require high doses.Whether or not a
patient continues to require it may depend on how much the islets were damaged by the pancreatitis, says Desai.

Hirose adds that since the transplanted islet cells are autologous, rejection is not a problem. However, researchers have not yet determined how long the islets can live in the liver or how to induce them to replicate.