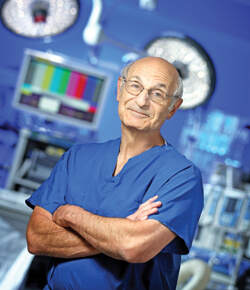 1 2
Frederic Eckhauser’s approach to an isolated parastomal hernia is similar to the technique used for prophylaxis and has resulted in satisfactory outcomes.

Parastomal hernias, which commonly occur after permanent stoma formation, continue to be a major clinical problem. Up to 35 percent of patients develop clinical or radiological evidence of a parastomal hernia within five years of the initial operation, and of these, about one-third need corrective surgery due to associated complications.

Although many parastomal hernias are asymptomatic, says Frederic Eckhauser, interimdirector of Johns Hopkins’ colorectal division, associated problems range from discomfort and ill-fitting appliances to life-threatening complications, such as perforation and bowel obstruction. “These can occur unpredictably,” he says, “with serious or fatal consequences.”

Several surgical procedures exist for repair of parastomal hernias, but there is not yet an optimum
technique. Eckhauser says surgeons should focus on two areas: first, developing approaches that can be used at the time of stoma formation to prevent subsequent hernias, and second, devising repairs that are safe, reproducible and durable.

One preventive approach Eckhauser takes is reinforcing the area around the stoma with mesh during the initial operation. “This may reduce the risk of hernia formation,” he says, “and specialized synthetic meshmaterials with large pore size and a high proportion of absorbable material have improved the safety of this method.”

When creating the stoma at the time of laparotomy, Eckhauser placesmesh behind the muscular layer of the abdominal wall but above the peritoneum, or inner lining layer. He then makes a cruciate incision in the center of the mesh and exteriorizes the bowel through the keyhole, and eventually matures it to the skin of the abdominal wall. Eckhauser routinely closes the peritoneum along the medial edge of the mesh to prevent it from adhering to and eroding into adjacent bowel within the abdominal cavity. This prophylactic approach holds promise, he says, and should be considered for all enterostomas because of its relative simplicity, low risk of adverse effects and reported benefit in reducing the risk of parastomal hernia.

Parastomal hernias that develop after enterostoma surgery or adjacent to an incisional hernia represent a clinically challenging problem. Eckhauser’s approach to an isolated parastomal hernia is similar to his technique used for prophylaxis, he says, and has resulted in satisfactory outcomes.

He and his colleagues at Johns Hopkins remain particularly concerned about large or recurrent parastomal hernias as well as incisional hernias. “These are technically challenging and require a modified approach,” he says. “In most cases, this involves relocating the stoma to another quadrant of the abdominal wall, reinforcing it with large pore mesh placed in a sublay or retromuscular position and then repairing the incisional hernia using nonabsorbable mesh to reinforce the fascial closure.”

These operations are often complicated and are associated with an increased risk of surgical-site
infections. To reduce this risk, Eckhauser uses incisional VAC negative pressure technology developed at Johns Hopkins in all cases of enterostoma surgery. “I am a strong advocate for the use of mesh prophylaxis to prevent parastomal hernias,” he says. “In addition, the majority of isolated, complex or recurrent parastomal hernias and those associated with adjacent incisional hernias can also be repaired with satisfactory outcomes.”

Who’s at Risk for Parastomal Hernia?