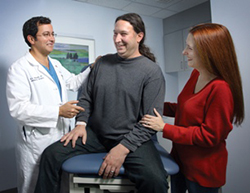 Dr. Horvath enjoys a light moment with Michael Downs and his wife, Nicole, following his first exam after surgery and cell treatment.

Nicole and Michael Downs met in 1995. A year later, the young couple from Gulfport, Mississippi, got married and began raising a family. Yet even though heart disease ran in his family tree—both his father and paternal grandfather have had bypass surgery and his maternal grandfather lost his life to heart disease—Michael never thought about his own risk. Then in 1998, at the age of just 25, he went to the hospital with chest pains. At age 26, he had a heart attack. Over the next several years he had nine stents placed in his body in an effort to keep his arteries open. In addition, he had a pacemaker and defibrillator implanted. A quadruple bypass operation followed. Now Michael was battling the unrelenting pain of angina, a signal that the heart is not getting enough blood and oxygen. He continued to live day to day, sometimes taking as many as 5-10 nitroglycerine tablets daily for relief.

Despite medicine’s best efforts, the heart disease kept winning. Michael was forced to stop working in 2002. His doctors in Gulfport told him that his heart disease was so advanced he would eventually need to consider a heart transplant.

Nicole Downs understands better than anyone the reality of Michael’s condition. She is concerned for their three children—not only for their risk of developing heart disease in the future, but also the risk of losing their father now. For her, the 600,000 lives claimed annually by heart disease is more than a number. This has motivated her to constantly look for new treatment options. Searching online, she learned of a promising new research study using a type of adult stem cell found in bone marrow, called a bone mesenchymal cell, or BMC. This experimental treatment was under way at the National Institutes of Health (NIH) Heart Center at Suburban Hospital, in Bethesda, Maryland, a long way from Gulfport and perhaps a long shot for Michael. But they had to try something new; Michael’s condition was deteriorating rapidly.

Since 2006, through its partnership with the National Heart, Lung, and Blood Institute (NHLBI), the NIH Heart Center at Suburban Hospital has conducted laboratory and clinical research on the diagnosis and treatment of heart disease. Keith Horvath, M.D., is the director of NHLBI’s Cardiothoracic Surgery Research Program, chief of cardiothoracic surgery at Suburban Hospital and the principal investigator of this cell-based therapy study. The premise is that a patient’s own BMCs are extracted from their hip, and then specially refined at the NIH Clinical Center, just across the street from Suburban. The refined cells are then injected back into the patient’s heart.

In preclinical research studies (before use in patients), Dr. Horvath and his research team were able to demonstrate for the first time that BMCs can stimulate new blood vessel growth and remain in the heart muscle for months. The finding was heralded as “novel and noteworthy” in the medical literature because it showed such promise. The cell-based study was approved for patients by the FDA in 2012.

“This is the best example I can give for why the partnership between Suburban and NIH exists,” says Dr. Horvath. He is referring to the idea of translational research—moving scientific discoveries more quickly from the laboratory bench to practical applications that can enhance the health and well being of people.

After consultation with Michael’s physicians in Gulfport, it was agreed that he would travel to Bethesda to be evaluated for the study. “There are few choices for patients like Michael, who are suffering from angina due to severe coronary artery disease and for whom stenting and bypass surgery are not an option,” says Dr. Horvath. “Michael’s best hope was for us to couple the cell treatment with laser TMR.”

Laser transmyocardial revascularization (TMR), a technique that Dr. Horvath helped pioneer in the 90s, uses a laser to create channels in the heart muscle in order to increase blood flow. Michael’s BMCs would then be injected adjacent to the channels created by the laser. Dr. Horvath explains, “The study protocol is to perform TMR and the cell injections as close together as possible in order to create the optimal environment to support growth of new blood vessels.”

On November 29, 2012, Michael underwent the two procedures at Suburban Hospital. Just a week after surgery, Michael was walking on a treadmill an hour a day—more than he had been able to do in 10 years—and episodes of angina were markedly reduced. “This angina relief should continue to improve with time as the injected cells are able to increase new blood vessel growth,” says Dr. Horvath. To follow the effects of the cell treatment postoperatively, Michael will undergo interval imaging studies using echocardiography or MRI to track improvement seen in the function of the cardiac muscle over time.

Dr. Horvath hopes that many more patients who have exhausted conventional treatment options for heart disease will follow in Michael and Nicole’s footsteps to participate in this study and prove its effectiveness. In addition to procedures with TMR, Dr. Horvath will also evaluate the combined effects of BMC injections and coronary artery bypass surgery. “This is just the beginning,” he says as he leaves his office at Suburban Hospital to make his way across the street to NIH, anticipating the answers science might provide for people with heart disease.