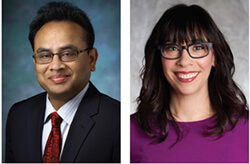 It’s a medical procedure that every man and woman should have by the age of 50. Katie Couric had one live on national television. It’s called a colonoscopy and it could save your life.

Colorectal cancer is the second leading cause of cancer-related deaths in the U.S. It is also highly preventable. “The removal of colon polyps significantly reduces the risk of colon cancer,” says Dr. Ghanshyam Gupta, a gastroenterologist with Advanced Gastroenterology in Rockville. “Colonoscopy is the most effective method to diagnose and remove polyps.”

Dr. Jessica Korman, a gastroenterologist with Capital Digestive Care in Bethesda, explains: “There are not many other screening tests that can find pre-cancerous areas of the body and remove them before they have a chance to turn into cancer. Colonoscopy is an opportunity to be proactive about one’s health.”

According to Dr. Korman, an estimated 148,000 new cases of colon cancer will be diagnosed this year, resulting in approximately 50,000 deaths. The good news is that colorectal cancer death rates have been declining progressively since 1990 largely due to screening colonoscopies.

What conditions are associated with the colon?

There are a number of conditions associated with the colon, including hemorrhoids, diverticulosis, inflammatory bowel disease, and colon polyps. Of all these conditions, hemorrhoids are perhaps the most common and can cause itching, pain and even bleeding.

Diverticulosis occurs when a pouch-like area forms in the wall of the colon and then becomes inflamed, leading to abdominal pain, nausea, vomiting, and often a fever. “I tell my patients that polyps are the pimples on the lining of the colon while diverticulosis is the dimple on the colon,” says Dr. Gupta. Diverticulosis is not considered a risk factor for colorectal cancer.

Inflammatory bowel disease is a term that encompasses Crohn’s disease and ulcerative colitis, both of which affect the digestive tract. Dr. Korman explains that there is likely a genetic predisposition to both conditions. When an individual with an inherited risk is exposed to a trigger (an illness or environmental trigger), the immune system is activated. With Crohn’s disease, the most common symptoms are diarrhea, abdominal pain, weight loss and fever. With ulcerative colitis, which is more common than Crohn’s disease, symptoms include diarrhea, abdominal pain and bloody bowel movements. Inflammatory bowel disease is considered a risk factor for colorectal cancer, so it’s important to get a proper diagnosis.

While both men and women can develop colon polyps, men are at a slightly higher risk for polyps than women. “We expect that 15 percent of women and 25 percent of men will have a polyp on their first colonoscopy at age 50,” says Dr. Korman. “Polyps are generally benign, but may have the potential to turn into cancer over time if left inside the colon.”

Who is at increased risk for colorectal cancer?

“Having a family history of colorectal cancer increases your risk of cancer if the family member is a first degree relative, if several family members have been affected, or if the cancer occurred at an early age — meaning 55 years of age or younger,” says Dr. Korman. Long-standing inflammatory bowel disease also puts people at increased risk.

Because screening schedules vary depending on individual risk factors, talk with your doctor about your general overall health, your family history of colorectal cancer and colorectal polpys, your conditions such as inflammatory bowel disease, and any symptoms you may be experiencing. It’s also important to be conscientious about following the screening protocol that your physician recommends for you.

Those considered at average risk of developing colorectal cancer who are asymptomatic should have their first screening colonoscopy at age 50, with subsequent colonoscopies every 10 years until age 80, when the incidence of polyps decreases. Individuals who are 50 and older make up 90 percent of the cases of colorectal cancer that are diagnosed each year.