Johns Hopkins Medicine Suburban - Suburban Gave Me My Life Back

Suburban Gave Me My Life Back 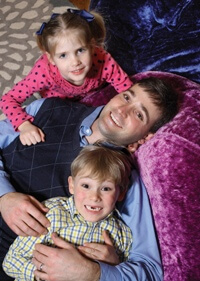 Geoffrey Rempel at home with his children.

January 13, 2011, started out like most weekdays for 37-year-old Geoffrey Rempel, who lives and works in Washington, D.C. At about 10 that morning a colleague stopped by his office to chat.

“As soon as he left, I felt a strange sensation,” Rempel says, recalling the morning’s events. “It was almost like being hit without being hit. I was dazed and not sure what was going on…it’s difficult to describe…like a very bad head rush, an out-of-body experience.

“The next thing I knew I was on the ground. I was trying to push myself back into my chair and wound up kicking papers off my desk.” Rempel tried to talk, but no sound came out. The father of two young children now knows he was having a severe stroke.

Rempel was first taken to a hospital close to his office where he was diagnosed with an ischemic stroke and was given the standard treatment for this condition, IV tPA (the clot-busting drug). When his symptoms did not improve, he was rushed to the NIH Stroke Center at Suburban Hospital, where he would have access to experts and technology unavailable at most hospitals.

Re-certified in December 2011 by The Joint Commission as a Primary Stroke Center, the NIH Stroke Center at Suburban Hospital provides a 24-hour stroke team comprised of certified vascular neurologists who assess each acute stroke patient upon arrival.

After a quick evaluation, a doctor on the stroke team ordered an MRI scan. At Suburban Hospital, through the NIH partnership, MRI is routine for acute stroke patients.

“The MRI scan tells us a great deal about the status of the brain, the blood vessels and the blood flow in the brain,” says Jose Merino, M.D., medical director of the Stroke Center. Among other advantages, MRI enables physicians to individualize the treatment for each patient.

Using MRI, the stroke team found that despite receiving tPA, Mr. Rempel still had a clot of 2–3 millimeters in length in the left middle cerebral artery. Blood was unable to reach the part of the brain that controls speech and movement on the right side of the body. Large amounts of brain tissue still remained healthy, according to Dr. Merino, but to preserve it, treatment had to be started immediately.

Mr. Rempel was referred to Bradley W. Dick, M.D., a Suburban Hospital interventional radiologist, to remove the clot. Dr. Dick inserted a catheter into Rempel’s groin and, using x-ray guided imagery, threaded it through the aorta and Rempel’s left carotid artery into the middle cerebral artery. Dr. Dick then inserted a suction device to break up and essentially vacuum out the pieces of clot.

The procedure took about a half-hour, and the blood immediately started flowing. Doctors kept Rempel sedated that night, and the next morning, recalls Dr. Dick, “he explained to me in detail what he does for a living and shook my hand with a powerful handshake.”

Mr. Rempel made rapid progress. His physicians at Suburban looked for the cause of his stroke in order to take steps to prevent another one. After a thorough evaluation they found that the cause of the clot appeared to be a tear in the lining of a neck artery, causing the blood to clot and eventually travel up into the brain, an unusual condition known as an arterial dissection.

Dr. Dick consulted with colleague Hugh Trout, M.D., a vascular surgeon, and they referred Rempel to Dr. Bruce Wasserman, an expert in neurovascular imaging at The Johns Hopkins Hospital. There Rempel would have a specialized magnetic resonance arteriogram (MRA) to obtain a more detailed view of the lesion.

Using the advanced MRA designed to look specifically at the carotid arteries, Dr. Wasserman discovered that the lining of the artery remained damaged and that blood flow was sluggish. Without an operation, another clot could form.

Dr. Trout operated on December 9 at Suburban Hospital, removing the damaged inner portion of the artery.

Rempel’s artery has completely healed since the operative procedure, and even though he will need yearly follow-up visits with his doctors for the rest of his life, he says he feels blessed.

“What they did at Suburban literally gave me my life back,” he says. “The fact that I am still here today, able to talk and with all my faculties about me is a testament to the skill and competence of the stroke team and the doctors at Suburban Hospital.”