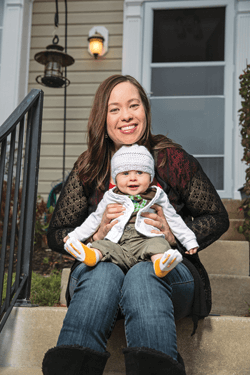 For two years beginning in 2010, I lived in agony every day, as if someone was stabbing me in the face with a knife.

It started with pain under my tongue, which quickly spread to the right side of my mouth and face. I saw a neurologist who diagnosed a nerve disorder called trigeminal neuralgia. A blood vessel was pressing on my right trigeminal nerve in two places, causing intense, lightning-like zaps to my face.

The neurologist put me on medication, which provided relief for a while but also had significant side effects where I would frequently lose my balance and lose my words. After a few months, the pain returned in full force.

Some days, the pain was unbearable. I was cautious about brushing my teeth, eating or speaking, because it could trigger an episode.

After one particularly debilitating period, I told my husband, Scott, that I couldn’t live like this anymore. Through his research, we found the Johns Hopkins Trigeminal Neuralgia Center. There, we met with Michael Lim, M.D., who told me that my best option for relief was surgery to insulate the nerve to prevent the blood vessel from pressing on it. I had the surgery in December 2011. I’ll be honest, the recovery was painful—but worth it. The stabbing sensation in my face was gone.

I was back at work in six weeks and am now doing everything I love. I’m enjoying life again. Best of all, my husband and I had a daughter in April. If I hadn’t had the surgery, none of that would have been possible.

In a majority of people who choose microvascular decompression (like Michelle Moir), the pain will never return, says Michael Lim, M.D., a neurosurgeon at Johns Hopkins. The open surgery involves an incision behind the ear. “It is an invasive procedure, so it’s better suited to patients who are younger and in better health,” Lim explains.

The other procedures—one uses a needle to inject medication and the other uses focused beams of radiation—are good choices for people who might not be able to undergo microvascular decompression. With these two options, however, the pain may return and require the procedure to be repeated.

How a Johns Hopkins Expert...