Eye on the Prize

After Olympic snowboarder Gretchen Bleiler suffered a career-threatening facial injury, Johns Hopkins surgeons got her back on the slopes 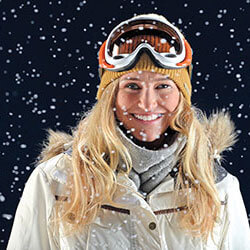 I’ve been snowboarding competitively for more than 10 years, and you don’t win four X Games gold medals or an Olympic silver medal without getting injured more than a few times.

But what happened to me during training in 2012 was by far the most traumatic accident I’ve experienced. I was working on double back flips when I came down on the trampoline the wrong way. My knee went right into my face, shattering my eye socket and my nose.

After doing some research, I decided Johns Hopkins was the best option. Because the damage was so significant, my surgeon, Michael P. Grant, M.D., Ph.D., said there was a chance I might have double vision for the rest of my life. But he promised he’d do the best he could to get me back to all the things I wanted to do.

He repaired my eye socket and my broken nose in a single procedure. Just four months later, he cleared me to start snowboarding again.

I still had the double vision, though, which made it really tough to navigate the half-pipe, which is where I compete. When you’re doing spins and flips up and down a 22-foot wall of snow, good vision is essential.

Working with my trainer, I started doing some serious rehabilitation with my recovering eye to strengthen the muscles so they moved at the same pace as the uninjured eye. Not long after, I dropped into a half-pipe again and realized my vision was back.

Aesthetically, you’d never know I’d been injured, thanks to the work Dr. Grant did. I’m still on the U.S. team and competing again—with my sights set on a spot in the 2014 Winter Olympics.

Repairing an eye socket is no easy task.

“You’ve got to work around the eyeball. Space is very limited, and visualization of the fractured bones and important nerves, blood vessels and muscles is challenging,” says Michael P. Grant, M.D., Ph.D., chief of oculoplastic surgery at the Johns Hopkins Wilmer Eye Institute. “You can do more harm than good if you’re not careful.”

Johns Hopkins performs eye socket reconstruction using computer-assisted surgery: Computed tomography (CT) scans are taken of the injured area beforehand. The injury is analyzed, the repair is performed virtually on a computer and the virtual surgery is sent to the operating room. The surgeon then plans the procedure, follows the plan during the actual surgery and verifies the results with a postoperative CT scan.

“This makes the operation safer and more predictable for our patients,” Grant says, “because we can precisely plan and perform the procedure.”

To watch videos of people telling their stories of care at Johns Hopkins, visit hopkinsmedicine.org/mystory. For more information, appointments or consultations, call 877-546-1872.