Boys will be boys, but when it comes to eating disorders, they’re not that different from girls 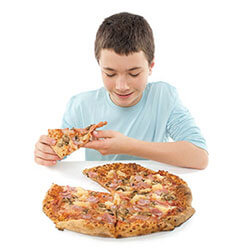 If you have teenage boys, you probably expect them to eat you out of house and home as their food cravings keep pace with their growing frames. What you might not expect, however, is an appetite that goes awry.

Experts want you to know: Teenage boys are not immune to eating disorders.

Overeating and undereating can both be problems in teenage boys, says Angela Guarda, M.D., a psychiatrist and the director of the Johns Hopkins Eating Disorders Program.

“In a way, overeating is kind of part of being a teenage boy,” Guarda says, “but obesity is becoming a much bigger problem in America.”

Healthy appetites aside, there are limits, says Shauna P. Reinblatt, M.D., a child and adolescent psychiatrist and medical director of the Child Psychiatry Overeating Clinic at Johns Hopkins. “If your teenage son gains a lot of weight from one checkup to the next,” she says, “it’s something you should talk to his doctor about.”

Reinblatt’s research has shown a connection between attention deficit hyperactivity disorder and bingeing and being overweight. Other research has demonstrated that depression can contribute to overeating, too.

On the other hand, depression and anxiety can also lead to undereating.

In the case of both extremes, it’s not always clear whether eating disorders are the cause or consequence of other mental disorders. For example, “depression could be a symptom of the starved state in anorexia nervosa,” which is morbid dieting behavior without loss of appetite, Guarda says. “Or loss of appetite could be the result of major depression, anxiety or obsessive-compulsive disorder.”

Fortunately, treatment is available. To understand the need for help, it’s important for parents to recognize the signs of overeating and undereating, which might not be as obvious as you think. (See “What to Watch For,” below.)

“I think parents recognize eating disorders in boys later, because they just don’t expect it,” Guarda says. “But once they do, boys often tell us they feel a sense of reassurance, because they felt like a ‘freak’ with a ‘girls disorder’ until they found out it happens to boys, too.”

What to Watch For

A significant change in weight isn’t the only clue your teen might have an eating disorder.

Shauna P. Reinblatt, M.D., a child and adolescent psychiatrist and medical director of the Child Psychiatry Overeating Clinic at Johns Hopkins, urges parents to be on the lookout for changes in emotional responses and eating habits.

“Sneaking and hiding food or eating multiple meals are some warning signs of overeating,” she says.

People who have anorexia nervosa may try to hide that they’re eating less by pushing food around on the plate. Excessive vomiting and laxative use are warning signs, too.

Eating disorders are treated based on individual needs and may include nutritional evaluation, behavioral therapy and medication.