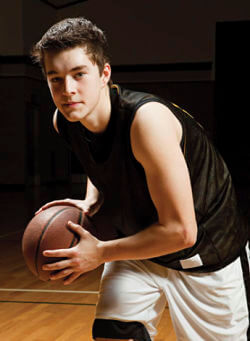 Johns Hopkins cardiologist Theodore Abraham, M.D., has a bold plan to reduce sudden cardiac death, which kills more than 3,000 young people a year in the United States, many of them athletes. Often, the cause is hypertrophic cardiomyopathy (HCM).

“I saw a lot of young kids come in and have this condition with a high risk for sudden death,” recalls Abraham, who in 2004 launched the Johns Hopkins Hypertrophic Cardiomyopathy Clinic. “What struck me during these conversations was that they were unaware, even if their own parent had died, that they were at risk. They were completely unaware.”

Abraham believed that a large academic medical center like Johns Hopkins could engage and give back to the community by offering a screening once a year, with a mission to offer young people information they wouldn’t otherwise have access to; use the screening to raise awareness about heart disease in the young; and research HCM.

“The most important thing about HCM,” he says, “is it’s the number-one cause of heart-related sudden death in people younger than 30. It’s very often publicized when athletes die suddenly, and very often the cause is hypertrophic cardiomyopathy.”

To date, Abraham and a band of more than 120 Johns Hopkins volunteers—cardiologists, physicians, nurses, allied health professionals and laypeople—have screened more than 1,000 young athletes. Abraham has developed a new screening protocol that includes a questionnaire, a blood pressure check, an electrocardiogram, an echocardiogram and an ultrasound to detect five of the most common causes of sudden cardiac death in youths.

Abraham hopes to see the day when every young athlete has a thorough heart screening in addition to a physical before participating in sports, which is a controversial stance because of costs. “We always tell people who are detractors or who challenge us, talk to the parent of the 14-year-old who just died, and find out what price they’d pay for that child,” he says. “The answer lies there.”

Watch a video of cardiologist Theodore Abraham, M.D., explaining why he established the “Hopkins Heart Hype” program and what his goals are for hypertrophic cardiomyopathy screening. Visit hopkinshearthype.org. For more information, appointments or consultations, call 877-546-1872.