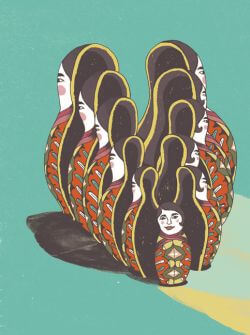 The Centers for Disease Control and Prevention reports that about one in three adult Americans is obese, a situation that’s exacting a huge toll on society. Some 160,000 people die prematurely every year because of obesity-related ills, according to studies, and a person who is 70 pounds or more overweight racks up as much as $30,000 in additional lifetime medical costs.

A number of Johns Hopkins researchers have been playing a crucial role in the effort to unravel and tame this daunting, complex problem, and on several fronts. This multipronged approach to tackling obesity has been paying off in key insights, as well as in new treatments whose benefits and promise are being proved in several groundbreaking studies.

For Tom Magnuson, M.D., the focus has been on finding ways to make bariatric surgery an ever more useful tool for combating obesity. Magnuson, who heads the Johns Hopkins Center for Bariatric Surgery, notes that bariatric surgery has far and away been the most effective weight-loss tool for those with a very high body mass index, or BMI—a numerical scale based on height and weight in which a number over 30 signifies obesity, and over 35 severe obesity.

“Most dietary and pharmacological interventions don’t seem to result in the sort of dramatic, long-term weight loss that people who are 100 pounds or more overweight need,” Magnuson says. “Surgery is the only treatment method that results in durable weight loss in that segment. It has potential risks, but, for most people who carry that much extra weight, the benefits are greater than the risks.”

Magnuson emphasizes that the primary goal of the surgery isn’t weight loss, but rather improvement of the medical disorders that usually accompany extreme excess weight. He ticks off a grim list: cardiovascular disease, type 2 diabetes, kidney disease, sleep apnea, arthritis, increased risk of cancer, and more. But these problems are dramatically improved and in many cases reversed after surgery.

“Eighty percent of people on diabetes medications are off them within a month or two after surgery,” Magnuson says. “Patients often come in here on 12 different medications, and six months after the operation they’re already off 10 or 11 of them. That’s gratifying.” He adds that it’s also an enormous boon to a health care system that is staggering under growing costs, noting that one large study showed the resulting health care savings for bariatric surgery patients exceeded the costs of the surgery within two to three years after the operation.

Long-Term Success Requires Behavior Change
As effective as bariatric surgery usually is, about one in four patients who get the surgery never loses the amount of weight expected, and most patients will regain at least some weight. That vexing problem is the one tackled by psychologist Janelle Coughlin, Ph.D., who directs the Obesity Behavioral Medicine Program at Johns Hopkins.

The essence of the problem isn’t related to a defect in the surgery, Coughlin says. Rather, it’s that while the surgical procedure prevents a patient from taking in too many calories, that restriction can be defeated if the patient doesn’t adapt his or her eating habits. “People often have the surgery without having fully engaged in lifestyle behavioral changes,” Coughlin says. “And those changes are necessary for success.”

The basic lifestyle changes that bariatric surgery patients have to embrace, Coughlin explains, are thought to be pretty much the same ones that patients who want to lose weight the old-fashioned way have to enlist: eating fewer calories (whether from foods or beverages) and moving more. To reduce the risk of postsurgical weight regain, Coughlin meets with patients who are candidates for the surgery to try to get a sense of whether they’re likely to have particular trouble in adjusting eating and exercise habits. In fact, insurance companies won’t cover the procedure unless the patient has made some effort to lose weight nonsurgically, but Coughlin tries to further zoom in on what sort of approach the patient has taken.

“I’d rather see that they’ve learned to chew their food more slowly and they’ve stopped skipping breakfast than that they’ve lost several pounds,” she says. “If they’re not making those sorts of changes, then I worry that they’re waiting for surgery to fix all their problems, but it won’t.” That’s why Coughlin favors working with patients on lifestyle changes before surgery, instead of waiting until weight regain becomes a problem months after surgery.

Tangible Benefits of Support Groups
Is it possible to lose significant amounts of weight—and keep it off—without surgery? The conventional wisdom says no, at least for the great majority of heavily overweight people. But Fred Brancati, M.D., is well on the way to helping overturn the conventional wisdom. Brancati, who heads the Division of General Internal Medicine at Johns Hopkins, is helping to run the largest, most ambitious clinical trial of a nondrug, nonsurgery weight-loss intervention in history.

The trial focuses on helping patients change their eating and exercise behaviors, with an eye to rigorously proving that doing so provides the sorts of impressive health benefits doctors have long been saying would follow. “We know we’re supposed to get improvements in heart disease, diabetes and cancer risks when people lose weight with diet and exercise,” Brancati says, “but no one has ever been able to test that claim. This study will have a huge influence on the way we think about and provide care for obesity.”

Started in 2001, the ongoing study involves 5,000 overweight patients with type 2 diabetes. (Recruitment is closed for this study.) Patients were randomly assigned to get either the usual care that people with diabetes receive, or participate in an intensive support program aimed at changing the way they eat and exercise. This latter group regularly meets individually with counselors, and attends frequent support group meetings and larger, themed events involving hundreds of fellow patients—NASCAR, golfing and “beat Pittsburgh” have been popular themes for the Baltimore-area patients in the Johns Hopkins patient group.

“We’ve been looking to create strong bonds between the patients themselves and between patients and counselors,” says Jeanne Clark, M.D., an obesity expert at Johns Hopkins and co-principal investigator on the trial. “This isn’t a single battle. It’s a long-term war, and we have to keep the patients engaged in fighting it.” Although the study continues through 2014, the results have already been encouraging: After nearly a decade, patients in the behavior-change group have kept their weight 4 to 8 percent below the regular-diabetes-care group. “It may not sound like a lot, but that amount of weight loss can have a big effect on disease risk,” Brancati says.

Interpersonal vs. Internet
It’s not necessarily losing weight that’s so hard, notes Larry Appel, M.D., a colleague of Brancati’s and director of Johns Hopkins’ Welch Center for Prevention, Epidemiology and Clinical Research. Rather, it’s keeping the weight off. And through a parallel study to Brancati’s, Appel is pinpointing what sort of behavior-change techniques work best.

“There hasn’t been a huge amount of research into weight maintenance in the period after weight loss,” Appel says. “Person-to-person counseling works. However, my instincts are that the combination of a person-to-person program supplemented by the Web would be even more effective.”

And not just any counseling. “A counselor who just provides information won’t help that much,” Appel adds. “We’ve really needed to train our counselors to understand human behavior and motivate people to develop the skills required to deal with a dangerous food environment out there.”

Another challenge: The costs of providing every overweight person with frequent personal counseling would be overwhelming. That’s why Appel is hopeful that the availability of Internet support, while it can’t replace counseling, can help reduce its frequency and duration and thus lower costs significantly.

In spite of the progress made by these researchers on different aspects of the problem, no one claims that the obesity fix is right around the corner. But, thanks to this research, the toolbox is getting fuller. That means more overweight patients can look forward to reducing their exposure to a host of disorders and significantly raising their quality of life. That’s an improvement that will have a profound effect on not just the third of the population that suffers from obesity, but for all of society.


Will There Be a Weight-Loss Pill?
Hope remains high that medical science will be able to provide a drug that safely makes weight loss easier. To that end, Tim Moran, Ph.D., who directs the Behavioral Neuroscience Lab at Johns Hopkins, has been studying “brain-gut communication”—that is, the way the body releases chemicals in the gut that help signal the brain that it’s time to stop eating.

Versions of these so-called satiety peptides work at different sites in the body and in different ways, providing Moran and his colleagues with a number of avenues for a potential intervention that would crank up the stop-eating signals in obese patients. One big clue that leads Moran to think he may be on the right track: The release of many of these peptides increases in patients who have bariatric surgery, an increase that appears critical to these patients feeling full after eating only small amounts of food.

“If we can make those sorts of signals more potent in patients who don’t have surgery, we might see the same sort of results,” Moran says.

Not that coming up with a viable drug to strengthen the satiety signal will be easy. A big part of the problem is that the body typically uses the chemicals it produces for many tasks, and that’s probably true of satiety peptides as well. That means increasing their strength may indeed lead to less appetite, but it could also have undesirable side effects, especially in the brain.

One strategy for trying to get the satiety effect without risking much harm is to come up with molecules that are very similar to the satiety peptides and work well in the gut, but that are too big to make it into the brain, which filters out many chemicals. In fact, Moran notes, researchers have discovered drugs that operate this way and can lead to weight loss of as much as 20 percent within six months. But so far they’ve only worked as injections, not as pills, making them unlikely to catch on with doctors and patients. Moran is also looking into how different types of bariatric surgery affect peptide levels.

“We’re hoping we can identify less drastic forms of surgery that will still provide comparable feeding suppression and weight loss,” he says.