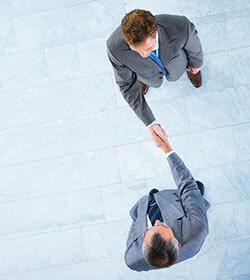 If it weren’t for Johns Hopkins, Denis Perrault might never have achieved his goal of going into politics. Now a member of the city council in his hometown of Swift Current, Saskatchewan, Perrault was reluctant to shake hands with people until a few years ago.

Perrault has a condition called hyperhidrosis, which causes excessive sweating, typically in the hands, feet and underarms.

“It was very difficult to shake hands or swing a golf club or play tennis,” he says. “I’m an accountant, so it also made for messy papers because the sweat would stain the ink.”

In severe cases, people who have the condition have hands that drip with sweat, to the point that when they are anxious they can fill much of a small jar during a clinic visit, says Malcolm Brock, M.D., a thoracic surgeon at Johns Hopkins. He says experts don’t exactly know what causes the disease.

Perrault went through a number of treatment options before turning to Johns Hopkins. “He’d tried to manage his disease with all sorts of therapies, from topical ointments to medication—to no avail,” Brock says.

At Johns Hopkins, people are tested to determine the severity of their condition and to rule out other causes of excessive perspiration. If all other treatments fail, surgery is recommended, as it was for Perrault.

During the thoracic sympathectomy, a minimally invasive procedure, a small incision is made in the armpit and the sympathetic nerve is cut in a precise spot that stops the sweating. Most people are back to their routine in less than a week.

“After the surgery in 2007, my hands have felt amazing,” Perrault says. “It’s opened a lot of doors for me—including getting into politics, which involves a lot of handshaking—and it definitely improved my confidence.”

Remedies Through Research
Hyperhidrosis is a condition that people often don’t talk about, and many doctors may not be aware of it, either.

“The good thing about Johns Hopkins is that we not only offer a procedure that can resolve the problem,” says Malcolm Brock, M.D., a thoracic surgeon. “We’re also studying ways to provide even better treatment.”

In the past, before recent refinements, some people would develop compensatory sweating in other places such as behind the knees. Although this problem is less common, two goals of the research now being conducted are to find ways to combat the compensatory sweating and further improve treatment.

Do You Suffer from Excessive Sweating?
Watch this educational video to learn about the condition and its treatments from Malcolm Brock, M.D.