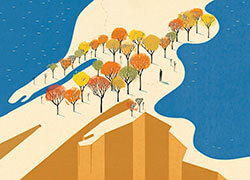 For surgeons, the landscape of the human body is fraught with potential obstacles at every angle, from bones that block vital organs to tissues and muscles that twist and turn in unpredictable ways. Similar to a navigator who must learn all possible routes to a destination, surgeons constantly explore alternative solutions for long-standing problems associated with traditional open techniques. Johns Hopkins has helped pioneer many of these methods and continues to push the boundaries of innovation to provide patients with the latest, safest and least-invasive forms of surgical care.

Beyond Laparoscopy
Large incisions were once considered the norm for operations on the stomach and other digestive organs, but the booming popularity of laparoscopy in the 1980s provided a turning point.

“What we found about laparoscopic surgery is that it’s less invasive, uses smaller incisions, and allows patients to recover faster and with less pain,” says Anthony Kalloo, M.D., chief of the Division of Gastroenterology and Hepatology at Johns Hopkins. “But as a next step after that, the question became, "Where should we move forward from this point?’”

To Kalloo, the answer was deceptively straightforward: surgery without external incisions. In 1998, he and his colleagues entered uncharted territory by spearheading the development and study of an approach known as NOTES, or natural orifice translumenal endoscopic surgery. These procedures use the body’s existing openings—namely the mouth, anus and vagina—as access routes to internal organs and structures. Rather than a surgeon directly opening the abdomen, for instance, an endoscope could be placed into the mouth, down the esophagus and through the stomach via a small internal incision.

Initial support was lacking, largely because perforating the stomach was historically considered a gastroenterologist’s nightmare due to the potential leakage of gastric juices that could cause infection, inflammation and in some cases death. But Kalloo believed that the stomach could safely serve as a viable portal to surrounding organs without having to revert to abdominal incisions. Through a series of animal studies, he was able to demonstrate this, paving the way for use in people.

Today, there have been more than 3,000 human applications of the approach worldwide. At Johns Hopkins, the endoscopy unit contains two NOTES rooms, making it one of the few hospitals in the country with such spaces.

“I think that NOTES is a part of our future and is here to stay,” Kalloo says. “It is in a slow evolution, but that’s good because we don’t want to begin a new surgical procedure without making sure that it is completely safe.”

Choosing a Better Path
Although the mouth provides a natural pathway to the stomach, it also serves double duty as an access point for the head and neck. In fact, the mouth, nostrils and eye sockets are all ports for reaching the brain, a particularly well-protected organ encased by boney skull.

“For certain lesions, injuries and tumors along the skull base, traditional approaches that require lifting the brain to get to the target can be associated with a prolonged recovery,” explains Kofi Boahene, M.D., a head and neck surgeon at Johns Hopkins who works alongside the neurosurgeon in skull-base-tumor surgeries. “By accessing the brain more directly via the nose, cheek or orbit, we avoid manipulating the brain. Patients benefit from a shorter surgery, a quicker recovery and virtually no facial scars.”

These approaches to brain surgery have taken time to evolve because, as Johns Hopkins neurosurgeon Alfredo Quiñones-Hinojosa, M.D., says, “you have to have a surgeon who is very comfortable with the anatomy, because we’re talking about working within the brain through a very small hole.”

For instance, the walls of the eye socket, which form the rooms of the sinuses and intracranial spaces, facilitate repair of sinus leaks and removal of skull-base and brain tumors. And an additional pathway, developed by Boahene and used exclusively by Johns Hopkins surgeons, involves the lower jawbone, whose anatomy provides a tiny window of entry to the infratemporal fossa, a narrow and tight space just below the cheekbone.

“These techniques have made our job a lot harder,” Quiñones-Hinojosa says, “but it’s also made it a lot easier, because now I get to see my patients smiling immediately after surgery, and getting to go home in a day or two after a surgery that otherwise would take weeks in the hospital to recover from. To see them smile is to know that the work we’re doing is making their quality of life better.”

A New Direction for Heart Care
The quest for minimally invasive surgical techniques is not limited to the use of natural orifices. Replacement of the aortic valve, the heart’s primary distributor of oxygen-rich blood, is relatively common but risky for about 15 percent of candidates because of advancing age and presence of other medical conditions. Traditional operations involve opening the chest and using a heart-lung bypass machine that maintains blood flow to the brain while the heart is stopped from beating, increasing the risk of stroke. But an effective alternative—transcatheter aortic valve replacement, or TAVR—uses a catheter to pipe the new valve through an artery in the leg or arm directly to the heart.

“The advantage is that no cardiopulmonary bypass is needed and we are not cross-clamping the aorta, so we are able to deliver the valve from the leg from a simple incision, and the patient is basically up and around the next day and can leave the hospital the day after that,” says Johns Hopkins cardiologist Jon Resar, M.D. “The recovery is much, much quicker. And the need for transfusions and blood products is significantly reduced.”

One recent patient at Johns Hopkins—an 86-year-old woman who was nearly bedridden—needed a new valve but was considered unsuitable for surgery because of her severe lung disease. With TAVR, she recovered and was back to her normal activities less than a week later. Another TAVR patient at Johns Hopkins recently underwent the procedure at 102 years old.

“This is evolving technology that I think is starting to become more and more common,” says John Conte, M.D., associate director of the Division of Cardiac Surgery at Johns Hopkins. “It’s faster recovery with minimal trauma to the patient. That’s the key.”

Addressing Unmet Needs in Kidney Donation
Since the world’s first laparoscopic live donor kidney removal was performed in 1995 at Johns Hopkins, potential donors have specifically requested the procedure because of its reduction in pain, recovery time and scarring. But Mohamad Allaf, M.D., director of minimally invasive and robotic surgery at Johns Hopkins, along with Robert Montgomery, M.D., director of the Johns Hopkins Comprehensive Transplant Center, pushed further to make kidney removal even simpler by refining a laparoscopic technique that uses only one incision rather than the usual three or four.

“We don’t want this to be a gimmick,” Allaf says. “We want to make sure that patients are benefiting. What are their pain requirements? Are they going back to work quicker? Are they healing sooner? Early data reveal that this single-port approach may be helping.”

In January 2009, Allaf and Montgomery performed the first kidney removal through the vagina. This approach is still being perfected, as the anatomy of the uterus somewhat complicates extraction.

Allaf predicts that such innovations will encourage more donations.

“We want to increase the number of people who donate,” he says. “The challenge with novel approaches is that you want to push the envelope, but the number-one priority is always the patients’ well-being and safety.”

To read more about surgical innovations at Johns Hopkins, visit bit.ly/pushing-surgical-boundaries. For surgical patient stories and information on the transplant center, go to the video library at bit.ly/jhhealthvideos.