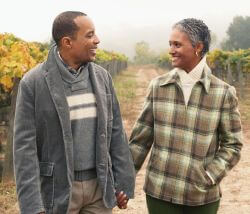 Until recently, oxygen was the only treatment to lower a person’s risk of dying from severe chronic obstructive pulmonary disease—or COPD. Today, minimally invasive procedures offer a breath of fresh air

About 32 million people in the United States are walking around with chronic obstructive pulmonary disease, or COPD, though only about half of them are actually diagnosed. That’s in part because most people aren’t seeking medical advice until the disease has progressed and shows symptoms.

The result? COPD is our country’s fourth leading cause of death.

Prevention Is Key
Johns Hopkins pulmonologist David Feller-Kopman, M.D., would like to change that, and prevention plays a key role. “Smoking is the most significant risk factor for developing COPD,” he says. “Up to 90 percent of cases are smoking-related.”

Once it has developed, though, COPD—which includes chronic bronchitis and emphysema—can be progressive and irreversible. Although mild to moderate cases often are treated with prescription inhalers, advanced COPD is less controllable.

New Hope
Lung-volume-reduction surgery can be an option for some patients, says Feller-Kopman, who heads Johns Hopkins’ interventional pulmonology program, one of only a handful in the country. “But most patients aren’t thinking about surgery for COPD,” he says. “It’s a big procedure and needs to be done on the right patients by the right surgeons.”

Newer minimally invasive techniques that are done with bronchoscopes are less traumatic and may be able to reverse the damage of COPD.

“So what we have,” he says, “is an alternative to more-invasive surgeries and slow-acting medications.”

For more information about COPD and other central airway obstructions, visit Johns Hopkins online at hopkinsmedicine.org/ip, or call 877-546-1872.