Johns Hopkins Health - Nothing to Sneeze At

Nothing to Sneeze At 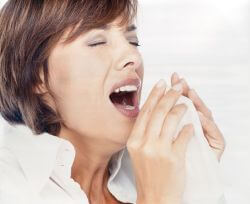 If you’re among the millions of people with allergies severe enough to require weekly shots, a new home treatment is helping the medicine go down


Whether sneezing, sniffling, itchy eyes and throat and headaches are your bane throughout a particular season or year-round, if you’ve had any experience with allergic rhinitis, you know it’s no walk in the park (and you might not dare do so).

For up to 10 million people in the United States, allergic rhinitis is severe enough to require weekly injections of allergens. Those allergens then stimulate the immune system to produce antibodies that minimize allergic response.

It’s called immunotherapy, and for decades people with allergy-related conditions have been rolling up a sleeve once a week. The treatment isn’t without some drawbacks, the most significant being the inconvenience of having to go to the doctor’s office every week for injections.

“And that’s not something you do just for a couple of weeks or even just during an allergy season,” says Johns Hopkins otolaryngologist Sandra Lin, M.D., a specialist in sinusitis and allergy. You’ll need to commit to those once-a-week office visits for several years.

Goodbye, Shots
Now, there’s an alternative. Known as sublingual immunotherapy, the approach involves a daily regimen of placing a few drops of an allergen solution under the tongue and holding it there for several minutes. Even better than the fact that there are no injections, you can do this treatment on your own, in the comfort of your home—or wherever you happen to be.

“Once you’ve had the initial testing to determine what’s causing your allergic rhinitis, you don’t have to step foot into a doctor’s office,” Lin says.

The potion, a custom blend of extracts proven through allergy skin testing, is given in consecutively stronger doses for about four months and then levels off. As with injections, the treatment must be taken for three to five years to maximize its long-lasting effects.

Plus, as Lin explains, “sublingual immunotherapy has been shown to improve allergy symptoms, decrease the need for medicine, decrease asthma attacks and decrease the chance of developing asthma in allergic children.”

Another benefit, Lin adds, is that it makes it easier to treat children who are typically terrified of shots.


Cost Comparison
Widely used in Europe and endorsed by the World Health Organization, sublingual immunotherapy—or taking allergy drops under the tongue—is not prevalent in the United States, mostly because it’s not covered by insurance. But, considering co-pays and time lost from work for allergy shots (which usually are covered by insurance), the cost of sublingual immunotherapy—about $1 to $1.50 a day—often is less, says Johns Hopkins otolaryngologist Sandra Lin, M.D.


For more information about sublingual immunotherapy or to make an appointment, call 877-546-1872, or visit us online at hopkinsmedicine.org/sinus.