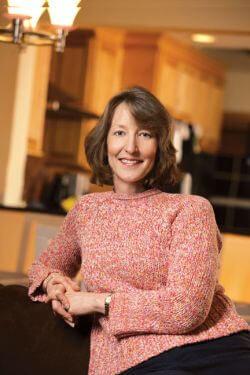 At 1:30 on a November afternoon, Kim Bauhs stepped up to address a group of colleagues in Philadelphia. Seconds later, she was splayed on the floor in cardiac arrest.

Quick-thinking bystanders who raced for the building’s automated external defibrillator were able to shock Bauhs’ heart back into action. Still, it was clear even as the Germantown resident was being whisked to the hospital that her hold on life was precarious. Twice more in the ambulance, the emergency crew had to defibrillate—or shock—her heart again.

The fact that Bauhs’ heart did respond to the defibrillator jolts gave doctors at the Philadelphia hospital where she was taken the big picture they needed to start effective therapy.

But it was merely the beginning.

Familiar to Frightening
For most of us, that familiar lub-dub rhythm in our chest is so reliable that we forget what a marvel our hearts are. When everything is functioning as it should, the heart’s upper and lower chambers—the atria and ventricles—work in perfect synchrony to circulate oxygen-rich blood throughout the body.

It’s a complex cycle of electrical activity that’s repeated about 60 to 100 times a minute (even more when we exercise). And just as faulty circuits in your house can cause lights to flicker, a glitch in your heart’s signals can throw its normal rhythm into chaos. Known as arrhythmia—a general term that includes many kinds of abnormal heartbeats—the condition can range from benign to lethal.

In the worst cases, the first symptom also can be the last.

Back from the Brink
Fortunately for Bauhs, the doctors treating her in Philadelphia plunged into a sequence of all the right stuff—medication to immediately settle her heart, cardiac ablation to zap the source of her wayward electrical current, beta-blocking drugs to slow her heart rate, and an implanted defibrillator that would monitor and react to a dangerous heart rhythm.

It was a good thing they did.

The next morning, Bauhs again found herself yanked from the brink. Her new, personal defibrillator, wired directly through her chest into her heart, already had found another episode of arrhythmia and shocked it into submission.

But even with her rampaging heartbeat calmed down, returning to her Maryland home hardly meant she was going back to life as she’d always known it.

“It is so bizarre,” Bauhs says, “to think for 46 years that you’re perfectly healthy, and then one day just drop. I saw my diagnosis in Philadelphia—it was sudden cardiac death.”

Just as suddenly, Bauhs saw that peace of mind and control of her life were luxuries that no longer applied to her. “When you’re walking around knowing that it could happen again,” she says, “the emotional impact of sudden cardiac death takes your breath away.”

Ironically, Bauhs already was familiar with sudden cardiac death. Though her own family history was clear of heart issues, her husband’s mother had died in her 40s, his brother had died at 19, his sister had been saved six years ago at age 39 by a portable defibrillator, his nephew had been diagnosed with an inherited arrhythmia, and her husband long had been under the care of Johns Hopkins arrhythmia expert Gordon Tomaselli, M.D.

Now, Bauhs herself needed every bit of Tomaselli’s accumulated wisdom.

Serious Circumstances
Approximately 325,000 people are killed annually in the United States by sudden cardiac death. Unlike a heart attack in which blocked arteries keep blood from reaching the heart, sudden cardiac death happens when an arrhythmia causes the heart to beat dangerously fast.

Many of us have sensed our hearts skip a beat or two or have felt faint, dizzy or out of breath—all classic symptoms of an arrhythmia. Most of the time, separating the periodic heart flutter from the serious arrhythmia that requires medical treatment is straightforward. The tricky part comes in, Tomaselli says, when standard tests such as electrocardiograms, or EKGs, don’t show why things are going awry for people like Bauhs.

Today, sophisticated genetic testing can give these elusive arrhythmias not only a name but also clues for tailoring treatment. That Bauhs was a perfect candidate for testing quickly became obvious.

A few months after Philadelphia, another cardiac episode shook her world again. And, only weeks after that, Bauhs’ heart went chaotic with a vengeance, battering her with 120 episodes in a single day.

For Tomaselli, who has devoted his life to unearthing the underlying biology of arrhythmias, not urging Bauhs to come in for a genetic diagnosis was out of the question. Suspecting a flaw in her DNA, he prescribed in-depth screening at Hopkins’ Center for Inherited Heart Disease, one of a handful of such centers nationwide for cardiac genetic testing.

Bauhs was more than ready. Already struggling to revise her expectations of herself—even wondering who she now was—she, too, needed answers. “I never wanted to repeat another day like the ones I’d had,” she says. “I wanted this to be at the back of my mind instead of at the front all the time.”

Comfort in Confirmation
Although Tomaselli suspected that an inherited arrhythmia might be at the root of Bauhs’ ordeal, she had none of the classic signs that usually show up on a stress test or EKG. Even her first round of genetic testing came up empty. But Tomaselli persisted, and another genetic test finally revealed an inherited condition called long QT 2.

“Getting to that diagnosis was enormously comforting,” says Bauhs, who had just started a new and intense executive-level position that included a 90-minute commute each way. “It means there are things you can do to manage it.”

Emotional stress is a big trigger for people with long QT, Tomaselli says. Coffee and other stimulants, fatigue, not drinking enough water or getting enough sleep, and even loud noises can bring on an episode. “Anything that causes a burst of adrenaline can be a problem,” Tomaselli says.

Bauhs admits that coming to terms with her new reality hasn’t been easy. “I know my life depends on doing the right thing, though,” she says. “So I leave work on time, telecommute one day a week, stay hydrated, take naps, watch everything that goes into my body and take care of my health.”

And she’s helped along by family and colleagues.
“Yes, it’s been a challenge,” Bauhs says. “But, for me, it’s life or not.”

Shocking Advice
Given that sudden cardiac death can strike and kill literally in minutes, it’s no surprise there’s a general outcry for more public access to automated external defibrillators (AEDs).

AEDs are portable devices that can restore normal heart rhythm to people in cardiac arrest. The device analyzes heart rhythm and advises whether a shock is needed to restore a normal heartbeat.

Typically, you’ll see AEDs in airports, hotels, gyms and other public places. But not always, and that’s why advocates like Kim Bauhs are making their point. In Maryland, there are guidelines and regulations for participating in public access defibrillation, or PAD. Despite some of the hoops, Bauhs says it’s worth the effort.


The Long and Short of It
The heart’s QT interval is the time during which the lower chambers of the heart are triggered to contract and then recover the ability to contract again. If that interval is longer than normal, it’s called long QT—a condition that can trigger a dangerous arrhythmia, or abnormal heartbeat.

Long QT can be either inherited—as in the case of Kim Bauhs—or acquired through the use of medications. It’s estimated to occur in one of every 3,000 to 5,000 people. Most first episodes happen before age 40.


For more information about the genetics of heart disease, listen to our podcast at hopkinsmedicine.org/mediaii/podcasts/judgepod.html.


Learn more about your heart at hopkinsmedicine.org/heart. For a physician referral, please call 800-547-5182.