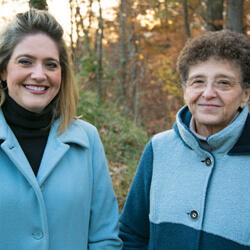 Julie Hagan knew she had to do something. She had been overweight her entire life and was living with type 2 diabetes, just like her mother, uncle and grandmother had. She was taking group exercise classes and had been working with a trainer for three years, but she wasn’t making much progress. She lost 45 pounds through a physician-supervised protein shake diet, but by 2011 her blood pressure and cholesterol levels were still far too high, and her diabetes was getting even worse. At age 36, she was already taking nine different medications every day, and her doctor said she would need even more. “That day,” remembers Hagan, “I logged onto the Johns Hopkins website and looked up ‘bariatrics.’ That day changed my life.”

Hagan made her decision carefully. Bariatric surgery is a powerful tool for weight loss and management of hypertension, diabetes and other conditions, not a cosmetic procedure. At the Johns Hopkins Center for Bariatric Surgery, potential patients need to have tried to lose weight on their own; meet with surgeons, counselors and nutritionists; attend support groups and be ready to make permanent lifestyle changes after surgery. The pre-surgery process can take up to a year, but is necessary to support the patient and their commitment to health with the diligence, respect and compassion they deserve. Hagan’s pre-operative process went smoothly. Anne Lidor, M.D., and her team performed her operation in October 2011.

“My first month, I lost 23 pounds,” recalls Hagan. At a follow-up appointment with her doctor four weeks after surgery, her triglyceride level had already fallen by half—220 to 102. In the months that followed, her diabetes resolved and she was able to stop taking all nine of her medications. Her 65-year-old mother Barbara Shotwell was amazed by the transformation. Shotwell had spent 42 years as a registered nurse and 25 years as an insulin-dependent diabetic who injected herself multiple times a day with two different forms of insulin. After Hagan told her mother that the bariatric surgery was the best thing she’d ever done, Shotwell decided to make the four-hour drive from her home near Scranton, Pennsylvania, to meet with Dr. Lidor’s team. She had her bariatric surgery in 2013.

Hagan and Shotwell have lost a combined 210 pounds and “both feel like we got a chance to hit the reset button.” Shotwell is now 67 and off all her medications—her only regret is not being able to have this type of surgery 30 years ago. Hagan says firmly, “I have not one single regret.” Hagan has joined the Johns Hopkins Bayview Patient and Family Advisory Council (see box), and considers Dr. Lidor a friend, not just a surgeon. “This surgery was life-saving. Dr. Lidor doesn’t like to take credit for my success, but I trusted her enough to not only put myself, but also my mother, under her care. That says it all right there.”

To make an appointment or for more information about the Johns Hopkins Center for Bariatric Surgery, call 410-550-0409 or visit hopkinsmedicine.org/jhbmc/bariatrics.

Hear Julie Hagan’s story in her own words in a video at hopkinsmedicine.org/jhbmc/patientstories.

Patients and their families have an invaluable perspective on their care. The Johns Hopkins Bayview Patient and Family Advisory Council (PFAC) invites patients and family members to provide feedback, collaborate and engage with Medical Center physicians and staff on policies, programs and daily operations to continually improve our patient- and family-centered care.