Twenty-five-year-old defies stereotypes of the disease 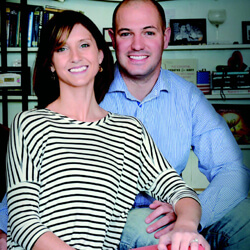 1 2
Stephanie White and her fiancé, Eric, began their relationship when she was still undergoing cancer treatments.

That’s what Stephanie White, just 20 years old at the time, kept hearing when she told doctors about her acid reflux and shooting stomach pains. When the pain got so great that it literally brought her to her knees in the middle of her college hallway, her primary care doctor ordered more tests. But even a specialist had a hard time deciding what to make of White’s case. She looked like a normal, healthy college student. Certainly not your typical cancer patient. When an endoscopy finally confirmed her worst fears—gastric cancer—in July 2010, White made an immediate promise to herself. “I was going to fight this.” Her specialist told her to go to Johns Hopkins.

Giving It Her All

White didn’t allow herself much time to question why she had stomach cancer. “It’s easy to try to blame things, but it’s better to fight,” she says. She certainly didn’t fall into any of the common populations where you’d expect to see gastric cancer. It’s most common in the Asian culture, and among adults over 50. She also didn’t spend time worrying about the prognosis. Stomach cancer has a cure rate of only 29 percent (by comparison, breast cancer has an 88 to 90 percent cure rate), and is the second leading cause of cancer death in the world. These were just statistics, and as White’s surgical oncologist, Mark Duncan, M.D., told her, she was not a statistic. She was a person.

The treatment plan was aggressive. Chemotherapy followed by surgery, then more chemotherapy and radiation. As is often the case with gastric cancer, White’s cancer was already at an advanced stage when it was diagnosed. To effectively treat the cancer, Dr. Duncan had to remove her entire stomach, creating a small pouch out of the small intestine to replace it. The Johns Hopkins Sidney Kimmel Comprehensive Cancer Center also offers “extended lymph node removal.” Surgeons like Dr. Duncan are trained to remove more lymph nodes during surgery. Although more complicated, removing more lymph nodes offers a better chance of completely removing the cancer.

Coming of Age as a Cancer Patient

“I grew up a lot during my cancer journey,” says White. She saw many close relationships disappear. “It’s easy to isolate yourself. Your attitude will make or break you.”

Just before White began her radiation treatments, she met her fiancé, Eric. Wearing a wig and laughing with friends at a football game, she didn’t let on that she had cancer. Both were coming out of other relationships. They dated casually for a while before White shared her battle with him.

“It’s hard not to make cancer the centerpiece of your life,” says Dr. Duncan. “So much of your life revolves around the cancer. You have to learn how to be a person again.”

A New Chapter of Life

White, an Annapolis, Maryland, resident, recently hit her four-year mark of living cancer free. “Every year is another milestone,” she says. But her biggest milestone was her graduation from nursing school in 2013. “Dr. Duncan was at my graduation,” she says.

Today, White is an adult oncology nurse who holds patients’ hands as they go through their own cancer journeys. Next October, right after she hits the five-year cancer-free mark, she and Eric will be married. Dr. Duncan will be there.

For more information visit hopkinsmedicine.org/gastric_cancer_center or call the Gastric Cancer Center at 443-997-4278 (GAST).

In Her Own Words

Hear gastric cancer survivor Stephanie White’s story in her own words at hopkinsmedicine.org/jhbmc/patientstories.