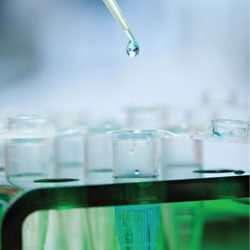 Dedicated physician scientists devote enormous amounts of time and energy to medical research on the Johns Hopkins Bayview campus. In fact, even as federal research funding is shrinking and less than ten percent of grants are funded, three scientists conducting extraordinary research on campus were awarded five-year research grants by the National Institutes of Health.

One of the projects awarded an NIH grant, led by Bruce Bochner, M.D., is the continuation of a decade-long project to understand a specific type of white blood cell, known as eosinophils. These cells, although important safeguards against parasites in places like Latin America and Africa, have little to guard against in the United States. They are often involved in allergic reactions where allergens are mistaken for parasites, injuring surrounding tissues and exacerbating existing problems like asthma. Dr. Bochner’s team is hopeful that targeting a specific protein will enable them to kill overactive eosinophils without the side effects caused by current treatments. Dr. Bochner’s 12-year-old nephew, who has an eosinophil-related gastrointestinal disorder, provides additional motivation to find a therapy.

Another project, headed by Antony Rosen, M.D., aims to understand the tissue damage caused by Sjögren’s syndrome, an autoimmune disorder that destroys patients’ salivary glands. Noting the “striking stability of the disease over long periods of time,” Dr. Rosen believes that the disease may “represent a new stable state,” as the immune system and tissue repair system counteract the disease’s effects. He and his team will examine these interactions, hoping to find new, more effective treatments for Sjögren’s.

The third grant-funded project, headed by Jeremy Walston, M.D., is attempting to determine whether mitochondria, which are essentially a cell’s power plants, could be one cause of frailty, a condition often seen in older adults. Dr. Walston’s team believes that mitochondria are impeded by low levels of inflammation as people age. As a result, despite needing even more energy to counteract the inflammation, cells produce less energy. Much more research will need to be done, but Dr. Walston is hopeful that their research will ultimately yield treatments to “help improve muscle strength and thinking ability, and lower the risk for development of chronic diseases.”

As a hub for medical scientists from Johns Hopkins Medicine and the National Institutes of Health, the Johns Hopkins Bayview campus has a long history of research leadership. Here are a few of the ways this research has ultimately helped save and improve hundreds of thousands of lives: