From Healer to Healed 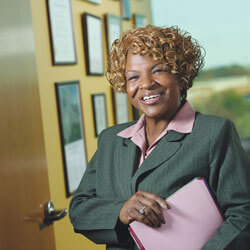 For 10 years, medical secretary Wanda Walker worked with urologic cancer patients at Johns Hopkins Bayview Medical Center. She scheduled their appointments, ensured they had correct medical forms and calmly listened to their stories of bladder, kidney and prostate cancer with open ears and caring ways.

But in August 2012, Walker unexpectedly came face to face with the same diagnosis as many of the patients she helped: kidney cancer. “I was shocked,” she says. “I’m usually on the other end of those calls.”

Doctors discovered the cancer, a four-centimeter mass on her right kidney, during a CT scan to monitor diverticulitis, a digestive disease Walker has had for years. “I don’t think I ever had any (cancer) symptoms,” Walker says. “I had no bleeding, no pain in my back.”

“Sometimes, tumors are so deep-seated or so large it’s just better to remove the whole thing,” he says. But instead of removing Walker’s kidney through a conventional open procedure, Dr. Pavlovich performed a minimally invasive laparoscopic nephrectomy. At Johns Hopkins Bayview, more and more urologic cancer patients are benefiting from these less invasive laparoscopic and robot-assisted procedures, which typically result in less post-operative pain, a shorter hospital stay and a faster return to daily activities.

Leaders in the Field

For decades, surgeons relied on open procedures when it came to surgical treatment of cancer. Yet in the 1990s, a team of experienced urologists and nurses decided to make Johns Hopkins Bayview the “cradle” of minimally invasive urologic surgery, Dr. Pavlovich says. That meant researching and implementing laparoscopic surgery.

Using three small incisions instead of one large one, urologists insert a telescope and small instruments through a patient’s abdomen and then remove the kidney. Urologists also can remove part or all of the bladder or prostate using laparoscopic surgery.

In recent years, Johns Hopkins Bayview urologists have incorporated robotic-assisted surgery into the minimally invasive program. Urologists still use small incisions and a telescope, just like manual laparoscopic procedures do. But with the help of the robot, they can control tiny instruments with superior precision. That means more healthy organs and tissue can be spared. When operating with the robot, urologists also have a 360-degree range of motion, which cannot be achieved with the human wrist.

“The robot allows for more precise surgery, more reproducibly, more often,” Dr. Pavlovich says. Urologists may soon use the robot for percutaneous treatments, where they use needles to freeze or heat and then destroy kidney cancer.

Within a few weeks of her surgery—and after a well-deserved vacation—Walker went back to work. She credits Dr. Pavlovich with saving her life. “I was diagnosed and had surgery and became a cancer survivor before I even knew it,” she says with a laugh. “He’s a great human being.”

In the office, Walker is still scheduling patients’ appointments, ensuring they have correct medical forms and listening to their stories. But now, as a kidney cancer survivor, her calming voice bears true empathy. “People need you to be down to earth,” she says.

“They’re scared. I can comfort them from personal experience.”

Kidney cancer, also called renal cell cancer, originates in the kidneys— the bean-shaped organs that sit behind your abdominal organs. Almost half of all kidney cancer cases are discovered incidentally, when patients are scanned for other ailments and illnesses.