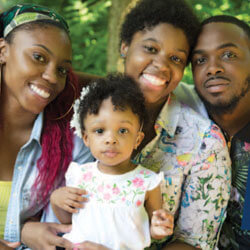 1 2 3
Tabatha (center) has received a lot of support from her family, including (left to right) sister Teea, daughter Karmen and boyfriend David.

Less than three days after a massive stroke left her unable to control the entire left side of her body in mid-April 2015, Tabatha Forest was back with her family. “I feel even better than before the stroke,” marvels the 21-year-old. Just a year ago, that kind of stroke could have left her disabled for life, but thanks to recent advances in stroke care, Forest says today, “It’s almost like nothing happened.”

Forest’s Saturday morning shift at the post office in Howard County, Maryland, had started normally, but suddenly, she felt faint. One of her coworkers managed to catch her as she collapsed, then called an ambulance. As the rescue worker checked her blood pressure, Forest recalls, “I noticed my left arm was hanging over the chair and I couldn’t move it. I tried to push back from the table, but my left leg was dragging.” The ambulance rushed her to Howard County General Hospital, as Forest thought, “I’m only 21!”

After Forest arrived at the hospital, emergency department physicians consulted with Steven Zeiler, M.D., Ph.D., at Johns Hopkins Bayview Medical Center and confirmed that she had a severe stroke. A stroke, or loss of blood flow to part of the brain, requires treatment within about four hours to avoid permanent brain damage. Forest’s stroke was caused by a blood clot large enough that a clot-dissolving drug failed to reopen the artery. With time running short, Dr. Zeiler decided to transport Forest via helicopter to Johns Hopkins Bayview’s Stroke Center, one of only three primary stroke centers in Maryland.

As soon as Forest’s helicopter landed, she was whisked to the neurosciences critical care unit NCCU, where Dr. Zeiler was waiting with Alexander Coon, M.D., a neurosurgeon who specializes in the blood vessels in the brain. After explaining the surgery to Forest, Dr. Coon inserted a catheter into the femoral artery in her leg and ran it up to the clogged artery in her brain, where he was able to use a device called a retrievable stent to trap and remove the blood clot. Forest remembers, “As soon as he pulled the clot out, I was wiggling my fingers and I gave them a thumbs up. I was so thankful I started crying.”

Forest went home from Johns Hopkins Bayview Monday evening, still hardly able to believe how fortunate she was. “It was a scary time, but I felt safe,” she says. “I’m so thankful for every nurse and doctor. All the right people were in the perfect place at the perfect time.”

With a Stroke, Time Lost Is Brain Lost

Every second counts when it comes to stroke treatment. Immediately call an ambulance or get to an emergency room if you or someone else has any of the following symptoms:

Learn more about strokes at hopkinsmedicine.org/healthlibrary.