Johns Hopkins Bayview News - A Leg Up On Pain

A Leg Up On Pain 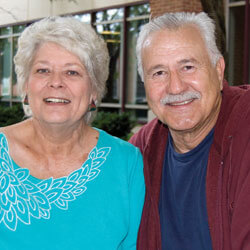 1 2 3
Roger Simpson and his greatest supporter, his wife Linda.

It started as pain and cramping in his calves after he exerted himself. Roger Simpson, a retired transportation engineer, wasn’t used to pain that prevented him from having an active lifestyle. He loved the outdoors. For years, he played softball six days a week. As a young man, he worked construction.

“The pain got so bad that I couldn’t even walk around the grocery store,” says Simpson, now 68 years old. “I’d have to wait in the car while my wife shopped.”

Simpson was used to doctors and appointments. Even after he and his wife Linda bought 30 acres of land in West Virginia to build their dream retirement retreat, they’d make frequent trips back to their hometown of Baltimore. Simpson had heart bypass surgery in 2001 that still required follow up. “Even after we moved, I wasn’t going to give up my Hopkins doctors,” he says.

So Simpson talked to his primary care doctor about the leg pain and told him he’d like to see a specialist.

Simpson was referred to Margaret Arnold, M.D., a Johns Hopkins vascular surgeon. An ultrasound showed he had hardening of the arteries in his legs, known as peripheral arterial disease (PAD).

“As you age, plaque builds up inside your arteries,” explains Dr. Arnold. “The arteries become stiff and narrow. Eventually enough plaque builds up that the arteries are not able to carry enough blood and nutrients to the muscles in the legs.” The pain that Simpson was feeling is referred to as claudication, one of the earliest symptoms of PAD. His muscles were demanding more oxygen than his body could supply because of the blockages in his arteries.

Risk factors for PAD include advanced age (which can’t be prevented), as well as smoking (which can). Other contributors are diabetes, high blood pressure, high cholesterol and obesity.

If left untreated, arteries may become so blocked that they cannot even supply enough oxygen when muscles are at rest. In severe cases, patients can develop painful sores on their toes that do not heal.

Johns Hopkins vascular surgeons are uniquely trained to weigh the various treatment options for a number of vascular diseases. For PAD, the most important treatment is lifestyle modification. Dr. Arnold encouraged Simpson to quit smoking, start a walking program and eliminate fried foods and salt from his diet. He’s worked to improve his diet and keep moving, and has taken steps toward smoking cessation. Physicians also can prescribe medications that work with the lifestyle changes to control cholesterol and blood pressure.

“Patients who continue to have disabling claudication symptoms despite lifestyle and medical modifications may be candidates for a surgical intervention to improve blood flow to the legs,” says Dr. Arnold. “The type of intervention is dependent on the degree of blockage.”

For less-severe blockages, physicians often do a minimally invasive technique called angioplasty—a balloon is inserted through a small puncture in the artery to open up the blockage. The blockages in Simpson’s legs were more severe and required bypass surgery. During this procedure, Dr. Arnold detoured blood around the blockage to improve the blood flow to his legs. Simpson had the bypass to his left leg in May 2014, and his right leg in January 2015. Each procedure required a two- to three-night hospital stay.

Throughout the process, Simpson and his wife appreciated Dr. Arnold’s honesty and attentiveness. “It’s not just about the patient,” says Linda. “It’s about the family, too. The three of us related very well to each other.”

Returning to the Great Outdoors

Life has improved greatly for the Simpsons since Roger’s bypasses. His pain is gone, allowing them to get back to enjoying all their land—riding ATVs, tending to their cows and fishing in the pond. Simpson still follows up with Dr. Arnold regularly, and received an angioplasty in one leg this June to further improve his blood flow. “I’m thankful to return to my normal life,” he says. For Simpson, that life is enjoying retirement in the mountains of West Virginia with Linda … and the occasional deer, raccoon, rabbit or cougar that stops by to take in the view.

The Johns Hopkins Noninvasive Vascular Laboratory provides testing to locate areas of vascular blockage and disease that may be producing a patient’s symptoms. Tests include:

At the appointment, vascular surgeons will review a patient’s symptoms and the findings of the Vascular Lab testing to design a treatment program.

The Johns Hopkins Noninvasive Vascular Laboratory was recently re-accredited by the Intersocietal Accreditation Commission, making it one of the nation’s most elite vascular labs.

Research and Innovation in Vascular Disease

Johns Hopkins vascular physicians and scientists are engaged in active research and regularly make discoveries that they can translate into patient care. As a leader in global health care discoveries, Johns Hopkins is dedicated to changing lives.