Family recalls terrifying moments after a ruptured brain aneurysm, and the comfort of the care they received 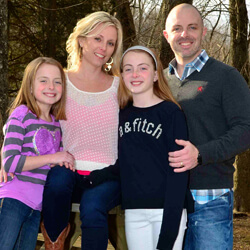 1 2 3 4
Eric and Karlyn Rittmeyer with their children

Eric and Karlyn Rittmeyer began their evening on October 22, 2013, the same way they had dozens of times before: at field hockey practice with their two preteen daughters. While the girls practiced, Karlyn, a 36-year-old resident of Perry Hall, Maryland, sipped hot chocolate and caught up with her friends. When she started getting chilly, Eric suggested she go sit in the car to warm up.

When Eric brought the girls up to the car after practice, they found Karlyn with her head in her hands. “I felt enormous pressure between my eyes. I couldn’t see, and my arms went numb,” Karlyn remembers. Then she started having seizures. Terrified and confused, Eric called 911.

Karlyn was taken by ambulance to the hospi­tal. They found bleeding on her brain, and flew her to Johns Hopkins Bayview Medical Center.

An angiogram confirmed Karlyn had a ruptured aneurysm in her brain, a condition that kills a third of people before they are even able to make it to the hospital. Just after midnight, Geoffrey Colby, M.D., Ph.D., a neurosurgeon at the Johns Hopkins Aneurysm Center, told the Rittmeyers he was clearing his schedule for emergency surgery. “Time stood still,” remembers Eric. “She was so young and healthy. She worked out five days a week. How could this be happening, and what was I going to tell our girls?”

An aneurysm is a bulging, weakened area in the wall of a blood vessel in the brain. If the wall becomes too thin, the aneurysm ruptures and bleeds into the space around the brain.

“Unfortunately, aneurysms are quiet,” says Dr. Colby. “They often are too small to cause symptoms.” While some patients may come to their doctor complaining of sudden headaches and have imaging done to catch the aneurysm early, all too many don’t realize they have one until it ruptures. “Our goal, whenever possible, is to diagnose and treat the aneurysm before it becomes a problem,” says Dr. Colby.

“Coming to a specialized center is critical for a ruptured aneurysm,” says Judy Huang, M.D., vice chair of the Department of Neurosurgery at Johns Hopkins Bayview, who worked with Dr. Colby to perform Karlyn’s surgery. “There are many parts to a good outcome: rapid diagnosis, and treatment that is individualized to the patient’s unique condition, and specialized care after surgery. Our team has the expertise to offer all of this to our patients.”

Surgeons at the Johns Hopkins Aneurysm Center specialize in a number of different proce­dures, so they are able to choose the one that will work best for each individual patient. In Karlyn’s case, Drs. Colby and Huang quickly agreed that an open surgery, called microsurgical clipping, would be the best option. Although more invasive than other options, they thought it would give them the best chance of completely repairing the aneurysm to reduce the risk of another rupture. Since Karlyn was young and healthy, they be­lieved she was strong enough for the complicated procedure, which uses small metal clips to stop the blood flow into the aneurysm.

Another option performed by Johns Hop­kins surgeons for ruptured aneurysms is called endovascular coiling. This option is minimally invasive, meaning that no incision in the skull is required. Rather, surgeons pass a catheter through the groin into the artery containing the aneurysm. Platinum coils are released through the catheter to induce clotting and prevent blood from getting into the aneurysm.

The Rittmeyers say that it was more than just the doctor’s expertise that eased their fears about the surgery. “When Dr. Colby was explaining everything to me, I felt his compassion,” says Eric. “It made me feel comfortable because I felt like he really cared.”

Although Karlyn’s surgery went incredibly well, recovery was still long and difficult. She spent two weeks in the neurosciences critical care unit (NCCU)—an eternity for this close-knit family to be apart. “Every single person who we came in contact with inside Johns Hopkins Bayview was incredible,” says Eric. “We went through a horrifying situation, and I just can’t believe how well we were treated.”

After she was discharged, Karlyn did outpa­tient rehab to regain her strength and function. “Therapy was tough,” she says. “In the beginning, it was hard to even hold my head up, but I made myself do it.”

Although there are a few lasting effects from her ordeal—Karlyn is now legally blind in one eye—she and her physicians are incredibly pleased with her progress. Only a third of all patients with a ruptured aneurysm make it out without “significant problems,” says Dr. Huang. Karlyn is a success story.

“I’m a miracle,” says Karlyn. “It’s shocking to think about how many people die from this.”

Karlyn is now able to drive again, and has returned to her fitness classes at the gym. She and Eric are looking forward to getting a chance to enjoy the pool that they put in their backyard just before her rupture last fall—something Eric worried they may never get a chance to do together with their girls. “I’m happy to be here,” says Karlyn. “And I’m going to make the most of it.”

“I’m a small business owner, so I’m all about customer service,” says Eric. Through his role on the Advisory Council, Eric hopes to share his perspective on what made his family’s experience so positive, and how that experience can be replicated for future patients.

“It’s simple. Show me respect, make me laugh, earn my trust,” says Eric. “That’s how people want to be treated, and that’s how we were treated during our stay.”

Hear from the Experts

“The thing that makes aneurysms so scary is that people often don’t know they have one until it’s too late,” says Dr. Huang. Although some people are born with a brain aneurysm, most develop over time. Risk factors include a family history, smoking and high blood pressure. They aren’t common enough to warrant stan­dard screenings, but if you start noticing new, severe headaches, you should contact your primary care physician.