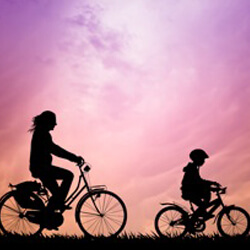 For years, Eva Clark longed to play out­side with her youngest son. She wanted to run with him, ride a bike with him, even just play catch with him. But a deep, intense pain in her right hip made it impossible. The pain began in 2000, right around the time her son was born.

“He had never known me to be able to play at all,” says Clark. “It was just too painful.”

For the first few years, Clark dealt with the pain. The 43-year-old Delaware resident would shift her weight to her left side during eight-to-ten-hour workdays at a retail store in Dover Mall. She visited specialists and took anti-inflammatory and prescription arthritis medications to cope with her symptoms. As the pain worsened, she used crutches to get around. Eventually, Clark reached her breaking point.

“My hip joint was so deteriorated, I couldn’t walk without falling to the ground,” she says. “My hip would just give out on me. I couldn’t deal with it anymore.”

A specialist diagnosed Clark with osteoarthritis, a chronic disease where the cartilage in a joint deteriorates, resulting in bones rubbing against one another, stiffness and pain. The good news: the osteoarthritis was isolated to her right hip.

The bad news: the orthopaedic surgeon she saw for a consultation in Delaware could not replace her hip joint due to its advanced deterioration. That’s when Clark discovered Harpal “Paul” Khanuja, M.D., chief of adult reconstruction, hip and knee replacement surgery in the Depart­ment of Orthopaedic Surgery at Johns Hopkins Bayview Medical Center.

The orthopaedic surgery program at Johns Hopkins Bayview is known for its highly trained surgeons and comprehensive orthopaedic services, including cartilage restoration, hip replacement and resurfacing, and knee replacement.

This approach also streamlines care, allowing patients to see the same specialists throughout their time at the Medical Center, says orthopae­dic surgeon Robert Sterling, M.D. “We have a team of people dedicated to give them the best outcomes possible, and we have the experience to make it happen,” he says.

Dr. Khanuja concurs. “It’s about what’s the best care for the patient,” he says. The first time Clark met Dr. Khanuja, she knew she was in good hands. “I was comfortable with him,” she says. “He sat there until I asked every question, and he answered them.”

In October, Dr. Khanuja performed a total hip replacement on Clark’s right hip. He also reconstructed part of her right hip and leg to accommodate for the two inches of height she lost from years of deterioration.

Making Up for Lost Time

Most patients who receive joint replacements are healthy, active people, and with Johns Hopkins Bayview’s multidisciplinary approach, many are able to return home within 24 hours of their surgery, Dr. Khanuja explains.

“Our goal is to keep them active, and they do better when they’re home and around their family,” he says.

Once home, patients like Clark complete six weeks of physical therapy. And soon after, most return to their lives, pain-free. “I have no pain,” Clark says. “It’s wonderful. Absolutely wonderful.”

In March, Clark finally became that “playful” mom she longed to be with her youngest son. For the first time ever, she and her son went for a half-mile bike ride together. They also play catch and even roughhouse from time to time.

“We’re making up for that now,” she says.

“I got my life back.” And for patients experiencing similar hip pain, Clark recommends the orthopaedic team at Johns Hopkins Bayview.

“Get it done,” she says. “It’s the best thing you can do for yourself.”

To make an appointment or for more information about the Department of Orthopaedic Surgery at Johns Hopkins Bayview, call 443-997-BONE.

The Pacific Business Group on Health Nego­tiating Alliance launched a National Employers Center of Excellence Network—covering 1.5 million employees and their dependents. The alliance selected Johns Hopkins Bayview as the only hospital on the East Coast to participate.

Alliance member employees of Walmart, Lowes and other large employers can have knee and hip replacement surgeries at no cost to them. All consultations and care are covered, and companies will pay travel and lodging ex­penses for the patient and a companion.