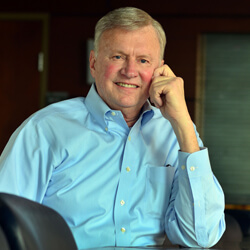 Retired commercial airline pilot William “Augie” DeAugustinis has enjoyed an active lifestyle keeping up with eight grand-daughters. The 67-year-old maintained good habits he formed as a pilot to stay in shape and eat well.

DeAugustinis began noticing some unusual changes in his strength and energy levels. He began to fall, and his hand strength decreased. Leg weakness made it hard for him to stand up after sitting. “These were early warning signs that I didn’t realize,” remembers DeAugustinis, of Gainesville, Georgia.

In 2008, a blood test found abnormally high levels of the muscle enzyme creatine kinase (CPK), showing that his muscles were breaking down. It took five physicians the next 16 months to come to an accurate diagnosis: inclusion body myositis (IBM).

Myositis is inflammation of the muscle. In some cases, it is thought to be caused by an autoim­mune disease where the immune system attacks muscles. The three types of myositis are poly­myositis, dermatomyositis and inclusion body myositis (IBM). DeAugustinis has IBM, which typically affects men ages 50 to 80. IBM results in muscle inflammation, which causes weakness in the thighs, hands and throat.

Falling is one of the main risks of IBM. Because of the lost leg strength in the quadriceps, walking becomes harder, and foot drop (inabil­ity to raise toes or foot from ankle) is common. Another major challenge of IBM is gradual loss of hand strength and eventually difficulty in swallowing, which can lead to choking.

After being diagnosed with IBM, DeAugustinis found the Johns Hopkins Myositis Center and neurologist Tom Lloyd, M.D, Ph.D. “The cause of inclusion body myositis is a complete mystery,” says Dr. Lloyd. “It is a progressive disease with no known cure, so at the Myositis Center we concen­trate on research and treatment.”

At the Myositis Center, a multidisciplinary team of rheumatologists, neurologists, gastroenter­ologists, nutritionists, nurses and researchers work together to study myositis and find more respon­sive treatment options for patients. Dr. Lloyd adds, “We treat more myositis patients here than any other center in the world. That experience and breadth of knowledge about all the aspects of myositis helps us to better manage the disease for each patient and their unique circumstances.”

As part of DeAugustinis’s myositis manage­ment, he does physical therapy and also finds some relief from massage and acupuncture.

“Myositis has permeated every aspect of my life,” explains DeAugustinis. “Getting dressed and shaving are no longer easy, and it’s hard for me to hold my toothbrush or silverware. Walking up stairs or on inclines, and on soft or uneven surfaces, slows me down.”

Dr. Lloyd recognizes that these basic tasks also are day-to-day necessities. “We use occupational therapy to teach patients new skills or ways to do things such as tie their shoes. Physical therapy ex­ercises help maintain muscle mass. Nutrition also plays a role in managing myositis. We try to guide patients when they have problems arise so that they can continue living comfortably,” he says.

DeAugustinis is grateful to have found Dr. Lloyd and the Myositis Center. “I know that Dr. Lloyd is the best in his field, as a researcher and clini­cian. He not only understands myositis, but also is personable and listens well. All the staff at the Myositis Center are of that caliber,” he says.

Other aids for daily living have made a posi­tive difference for DeAugustinis. Rubber tubing placed over flatware handles help him maintain a better grip. He had his bathroom modified with grab bars and a walk-in shower to avoid having to step over a bathtub wall. A knob on his car steer­ing wheel allows him to continue to drive safely. And, his wife created a special gadget to help him button shirts and pull zippers.

Now, DeAugustinis serves on the board of The Myositis Association. He participates in myositis research in hopes of discovering better ways to manage the disease.

He shares, “There is life after diagnosis. I still have an excellent quality of life. I’m not in a lot of pain, and I’m at peace with what I have.”

For more information on myositis or to schedule an appointment, call 410-550-6962 or visit hopkinsmyositis.org.