Early detection and a watchful eye lead to a cure 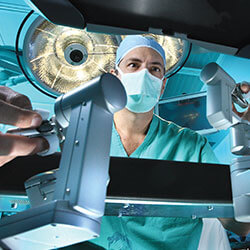 In 2013, Ron Wible learned that he had cancer cells in his prostate, a gland of the urinary and reproductive systems. Since the cancer cells did not appear aggressive, his urologist decided to monitor his condition with regular prostate-specific antigen (PSA) blood tests. Without any symptoms or side effects from the cancer cells, Wible carried on with his normal life.

By January 2015, Wible’s PSA score had increased enough that it was time to consider treating the cancer before it grew more. It was becoming harder for him to urinate, which is a symptom sometimes associated with prostate cancer. Wible’s local urologist in Winchester, Virginia, recommended that he see Johns Hopkins urologist Christian Pavlovich, M.D., to explore treatment options.

“In Mr. Wible’s situation, it was wise to be conservative and use active surveillance to keep an eye on his slow-growing prostate cancer for some years, instead of immediately treating it,” says Dr. Pavlovich, director of urologic oncology. “By the time the cancer had grown more and I met Mr. Wible, a nodule could be felt in his prostate and a second biopsy confi rmed that his cancer had grown significantly in size, though it was still quite curable.”

Standard treatment options for prostate cancer are either surgery or radiation. Because Wible was only 60 years old and the cancer appeared to be contained to his prostate, Dr. Pavlovich recommended robotic surgery to remove the cancerous prostate gland. Radiation, although an option, has different side effects including some risks that increase over time.

The surgery was a success and all the cancer was removed. Wible stayed only one night after surgery at Johns Hopkins Bayview. “It was one of the best hospitalizations I’ve ever had, and I’ve had plenty,” he says. “I can’t praise the staff enough. We always knew what was going on thanks to their communication and care. ”

Wible says managing his cancer was easier with the help of Dr. Pavlovich, nurses and staff. “They were willing to work with my insurance and do extra paper work. Thanks to this team, it was easier to navigate the bureaucratic details,” recalls Wible. Despite living more than two hours from Baltimore, being treated at Johns Hopkins Bayview worked well for him. “We traded lots of phone calls, and Dr. Pavlovich kept in touch with my local doctors to help me avoid unnecessary trips to Baltimore. I’ve only had to make four trips so far,” he adds.

Life is back to normal for Wible. Gardening keeps him active. He enjoys walking his dog, Ike. Wible is grateful that this cancer was detected at an early stage. Dr. Pavlovich adds, “Finding this cancer at a curative stage was key. A period of active surveillance allowed for several years at maximal quality of life, while not letting the window of curability close for us to effectively treat it.”

For more information or to make an appointment with a Johns Hopkins urologist, call 410-550-7008.

Prostate cancer screening is often conducted by primary care physicians. Screening should include a digital rectal exam and/or a prostate-specific antigen (PSA) blood test. Men should talk with their physicians to make a shared decision about if or when to be screened.

Men in their 40s can have a PSA blood test to determine their baseline PSA score. If the score is low, the test can be repeated every two years. Men age 55 to 69 benefit the most from screening.

Robotic surgery is available for many urologic cancer procedures, such as the surgical treatment of prostate, kidney and aggressive bladder cancer. “It’s an extremely refined set of tools,” explains Dr. Pavlovich. Robotic instruments can be placed exclusively in the pelvis to avoid exposing abdominal organs to unnecessary risks while removing the prostate gland. Minimally invasive approaches allow for nerve sparing, less blood loss, and earlier and easier recovery.

Dr. Pavlovich is the only surgeon in Maryland, and one of only a handful on the East Coast, who performs robotic surgery to remove the prostate gland in a way that avoids the abdomen, which is a particular boon to patients with gastrointestinal conditions, prior abdominal or inguinal surgeries, and/or obesity.