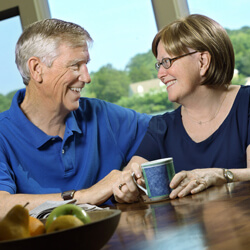 Lung cancer is the second-most commonly diagnosed cancer in both men and women. It is often found in people with long smoking histories, and occasionally in those who have never smoked. Here are two inspirational stories of people living with lung cancer.

Finding Optimism and Making the Most of Each Day

Anne Biggins was enjoying retirement in Solomons Island, Maryland, alongside Jim, her husband of 45 years. Together they loved to travel and spend time with their three grown sons and five grandchildren. In August 2012, a persistent cough led Biggins to her primary care physician.

The lung nodules that showed up on a chest X-ray and CT scan completely stunned Biggins. Her physician suggested that she go to the pulmonary nodule clinic at the Sidney Kimmel Comprehensive Cancer Center on the Johns Hopkins Bayview campus. The team there diagnosed her with stage IV (four) lung cancer. “It was a huge shock to everyone,” remembers Biggins. She had never smoked, but was exposed to secondhand smoke 20 years ago.

Her first step in treatment was to have a pleurodesis procedure to prevent more fluid from building up around her lungs. While this procedure does not treat lung cancer, it helps to ease some of the symptoms, such as coughing. Her next step was meeting medical oncologist Phillip Dennis, M.D., Ph.D.

Again, Biggins was surprised, this time by Dr. Dennis’s optimism. “He talked with me about the long journey ahead and research that could extend my life span,” says Biggins. “Dr. Dennis was optimistic, making lung cancer a chronic disease and not a death sentence.”

“My optimism is because of research,” Dr. Dennis explains. “There are new drugs becoming available that have a lot of potential to help people.” Biggins learned that she has lung cancer with an epidermal growth factor receptor (EGFR) cell mutation, which is more commonly found in women of Asian descent. She enrolled in a clinical trial to try a new drug designed to target this mutation, which was effective for her for about a year.

By December 2013, Biggins’ speech became slurred, and she learned the cancer had spread to her brain. Precise radiation treatments pinpointed and destroyed the brain lesions. After recovering, Biggins was ready for chemotherapy. “If the cancer responds well to the chemotherapy drugs, then the symptoms improve. It can help lessen the pain and coughing,” says Dr. Dennis.

In the summer of 2014, Biggins began “maintenance” chemotherapy, coming to Johns Hopkins Bayview every three weeks. “I’m feeling pretty good and have quality of life,” she reports.

“The whole group at the Cancer Center is very encouraging,” notes Biggins. “The people at Hopkins Bayview are unfailingly nice. From the parking and cafeteria staff to the doctors and nurses, everyone is amazing and kind. It makes an incredible difference.”

Biggins’ husband Jim is her main caregiver. She appreciates his love and assistance, as well as the support they both receive from family and friends. Now, they go on small trips and overnight outings. Gardening and tending to their flowers together brings them joy. Biggins gives back by volunteering with her church and local Habitat for Humanity projects.

“Cancer does change your life. My view of this very serious disease has transformed thanks to the optimism Dr. Dennis inspired in me. I’m grateful to be associated with Johns Hopkins and its resources,” says Biggins.

Covering All of the Bases

In 2010, John Forrer, a 52-year-old from Dundalk, Maryland, went for a chest X-ray after an injury at work. He did not have any broken bones, but the X-ray showed hundreds of nodules on both his lungs. Forrer, a longtime smoker, says the news made sense to him—he had been more tired after work lately and often could not catch his breath. “I knew something was up,” he remembers.

“Some of the lung nodules cleared up and others stabilized or stopped growing,” says Forrer. He continues to come to Johns Hopkins Bayview every three weeks for chemotherapy.

The treatment has helped him breathe easier. “I don’t gasp for air as much anymore, or have that feeling of hyperventilating,” he says. Forrer tries his best to keep up with his 8-year-old son, Brian. “I can lead a pretty active life, so I try to exercise and walk or play ball with my son,” he says.

Forrer gets all of his health care at Johns Hopkins Bayview, seeing a cardiologist, urologist and primary care physician. “It’s great having my team of doctors in one place,” he explains. “The computers at each office have all my information and history, and the doctors leave notes and communicate with each other so they each know what’s going on with every part of my care.”

Forrer expresses gratitude for the excellent care he has received. “The nurses at the infusion center do a great job taking care of me so I’m in the best health I can be,” he says. “I see the teamwork among the doctors and nurses. They’re professional.” It all makes a positive impact on Forrer. “To me, Dr. Purtell is the greatest doctor in the world. He always comes up with the right solution.”

For more information about the lung cancer program, visit hopkinsmedicine.org/lungcancerprogram. To make an appointment, call 410-955-LUNG (5864).

The Excitement Is Building