A decade after bariatric surgery, patient reflects on daily triumphs and tribulations 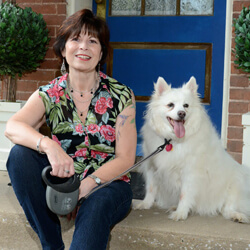 In 2004, Facebook launched. The series finale of the television sitcom “Friends” aired on NBC. Incumbent president George W. Bush beat John Kerry in the presidential election. Also in 2004, Michele Henderson, a then-40-something Westminster, Maryland, resident, decided to have bariatric surgery in an effort to improve her health. She has kept off the 110 pounds she lost for the last 10 years.

“When you are obese, you get used to living in a way in which everything is an effort,” says Henderson. “Even simple things, like bending over to put on my shoes, were a challenge.”

Weight had been a lifelong struggle for Henderson. She had tried everything, every diet imaginable. “I always lost weight, but I couldn’t keep it off,” she says. And her health was beginning to pay the price—she had high blood pressure, was borderline diabetic, had chronic back pain and wasn’t able to walk any distances. “I had basically given up.”

It was Henderson’s psychiatrist who first suggested she may be a good candidate for bariatric surgery. After a recommendation and lots of research, Henderson met with Thomas Magnuson, M.D., chief of general surgery at Johns Hopkins Bayview Medical Center. “He explained to me that surgery was a tool,” says Henderson.

“Bariatric surgery is a lifeline tool that is always there for patients,” says Dr. Magnuson. Over the past 20 years, surgeons have perfected several bariatric procedures, both open and minimally invasive, that work by changing the size of the stomach, the length of the small intestine, or both. One common procedure, called the Roux-en-Y gastric bypass, reduces caloric intake two ways. First, the surgeon applies a line of staples across the entire diameter of the stomach close to where it joins the esophagus. This reduces the stomach’s capacity to a small pouch the size of an egg. Next, surgeons make an opening in the pouch and connect a piece of the small intestine. After the procedure is complete, all food the patient eats will bypass nearly all of the stomach and the first two feet of the small intestine. Patients ultimately require much less food to feel full and satisfied.

A New Relationship with Food

Bariatric surgery is much more than just “rearranging plumbing,” says Dr. Magnuson. It is about changing the way patients think about food and nutrition. Before surgery, Henderson met with a nutritionist at Johns Hopkins Bayview for months to help prepare her for the changes in her body, and teach her healthier eating habits. Surgery also is successful because patients become more mobile as they begin to lose weight, so they are able to exercise more and develop healthier lifestyles.

To make an appointment or for more information about the Johns Hopkins Center for Bariatric Surgery, call 410-550-0409 or visit hopkinsmedicine.org/jhbmc/bariatrics.

Are You a Candidate for Bariatric Surgery?

The National Institutes of Health (NIH) has standardized guidelines for determining whether or not a patient is a qualified candidate for bariatric surgery. The Johns Hopkins Center for Bariatric Surgery adheres to these guidelines.

Are you interested in scheduling a consultation with a bariatric surgeon? The first step is to attend a free information session.

These sessions discuss the procedures offered at the Johns Hopkins Center for Bariatric Surgery, the risks and benefits of bariatric surgery, and insurance considerations. After you successfully complete your information session, a member of the staff will contact you to schedule an appointment.

To see upcoming session dates, visit hopkinsmedicine.org/jhbmc/bariatrics. While you're there, you can find out about another patient's perspective on bariatric surgery.