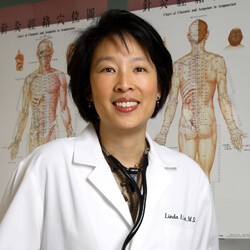 With an M.D. from the University of Chicago, Linda Lee did her internal medicine residency at U.Penn. and her gastroenterology fellowship at Johns Hopkins, where she’s remained for 18 years as both bench scientist and clinician.
photo by Keith Weller

“In traditional Chinese medicine,” says gastroenterologist Linda Lee, “the gut is the gateway to most human disease.” That concept isn’t so far-fetched when you consider that the GI tract contains 70 percent of our immune cells, that its massive nervous system ties to the CNS, that its trillions of bacteria have far-reaching effects on health.

“So I’m surprised,” Lee adds, “that Hopkins has the only academic integrative medicine service in the U.S. based in gastroenterology.”

So a key advantage of the center, she says, “is its ability to ease both symptoms and consequences of being chronically ill.”

Here we ask Lee what she and colleagues—physicians, nutritionists, psychotherapists, acupuncture and massage therapists—offer patients.

Yes! But IM pulls the best evidence-based therapies from both conventional and what were once considered alternative approaches for patients. We’re highly selective. Our aim is to enhance conventional care.

What drives patients to seek it?

Reasons vary, studies say. Often patients come with disease-based fears and are helped by being better informed. They worry about long-term effects of pharmaceuticals. But also, a desire for autonomy drives them, since not feeling in control of your own health is disturbing.

Tell us why we need integrative medicine.

Take, for example, IBS, whose economic and social impact is enormous, whose patients report a lower health-related quality of life, even, than those with end-stage renal disease. They have more additional chronic issues—more migraines, pelvic pain, fibromyalgia.

And besides their discomfort, many patients lack real understanding of the disease, surveys show. Some 50 percent, for example, think IBS can lead to cancer.

A conventional approach that some clinicians still use treats IBS as if it’s a psychiatric illness. Yet today’s research shows it’s a disorder of the brain-gut axis that prompts visceral hypersensitivity. Not recognizing that can stigmatize patients, can bring frustration and anxiety that accentuate the GI symptoms.

So what do you do?

We explain the likely physiological underpinnings of IBS. We discuss diet’s importance in aggravating symptoms and make our nutritionist available.
We also discuss meta-studies that suggest cognitive behavioral therapy (CBT) can be as effective as a low-dose antidepressant for some symptoms.

We offer CBT and/or traditional pharmacology, depending on each patient’s needs and concerns.

With an M.D. from the University of Chicago, Linda Lee did her internal medicine residency at the University of Pennsylvania and her gastroenterology fellowship at Johns Hopkins, where she's remained for 18 years as both bench scientist and clinician.