Inside Tract - Seeing is believing 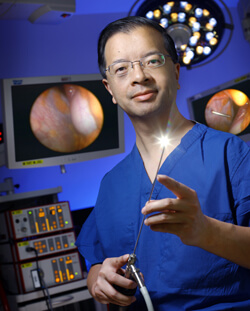 In the ample new suite in Hopkins’ Sheikh Zayed Tower, Zhiping Li confirms mini-peritoneoscopy’s advantages. Already useful for biopsies throughout the peritoneum, the nimble technique should prove especially useful for the ultra-minimally invasive NOTES approach to surgery that Li’s colleagues are nurturing.
photo by Keith Weller

The dilemma facing Max Zacur* wasn’t immediately life-threatening.But the Baltimore man in his 40s—he had no outward signs of illness—recently came up against one of those medical-path choices that seem simple but can quickly change daily life and that, collectively, strain U.S. health care.

Fortunately, Zacur’s way was cleared by a technology now coming into its own at Hopkins, his dilemma resolved.

A few years back, after a checkup flagged elevated liver enzymes, Zacur learned that he had hepatitis C, genotype 1.

A local gastroenterologist performed a percutaneous liver biopsy—the older sort with palpation first and “blind” needle insertion. But as the resulting pathology report showed little inflammation and no fibrosis, the hallmarks of active disease, Zacur opted to bypass treatment, given its reputation for side effects and low efficacy.

Last year came a repeat: His liver enzymes were again suspect though he still felt fine. This time, Zacur went to a radiologist for a biopsy, one guided by ultrasound. And this time, the sample yielded quite different results, showing severe, significant fibrosis.

“Fortunately,” says Hopkins hepatologist Zhiping Li, “therapy for hepatitis C is now more potent. The downside, however, is that side effects have worsened. People daily feel like they have the flu. Some develop anemia.”

Zacur’s apparently burgeoning hepatitis gave Li pause, and he realized that an accurate global survey of Zacur’s liver disease was in order. For the patient’s third biopsy—this time at Hopkins—direct visual inspection of the liver via peritoneoscopy would guide the needle.

Brought to Hopkins from Germany three years ago, mini-peritoneoscopy lets endoscopists visualize the peritoneum and its contents via a small, streamlined instrument fed into a single port. A second opening admits the biopsy needle.

The technique is extremely nimble because both ports need be only a few millimeters wide and can be put anywhere in the abdomen that a patient’s condition allows.

After biopsy, two Band-Aids are enough to close.

“It’s a true advance over traditional laparoscopy,” says Li, “which involves 5- to 10-millimeter suture-requiring holes in the abdomen.”

The new mini-peritoneoscopy service is unique in the United States, though the technique has spread throughout Europe. Li has seen some 50 patients so far, mostly with hepatitis.

Three advantages stand out, he says. “One is that you can retrieve a larger tissue sample.” That’s in contrast to ultrasound where housing the biopsy needle within the probe limits needle size.

Also, Li adds, “we use sedation and patients are happier with that.” Last, he says, post-biopsy bleeding isn’t a problem because there’s real-time hemostasis. “We catch bleeding right away because we can see it. That avoids painful hematomas that are almost universal otherwise.”

The major benefit, though, lies in damping down liver-sampling error—a traditional hazard, Li says, because liver disease rarely spreads uniformly throughout the organ.

That certainly was the case with Zacur, whose frontal left lobe showed spots of fibrosis but whose right was clean. With mini-peritoneoscopy, however, seeing was believing, and the global view of the man’s liver it enabled made Li’s recommendation of “watch and wait” the one of choice.