Inside Tract - A trove of triggers for Crohn's?

A trove of triggers for Crohn's? 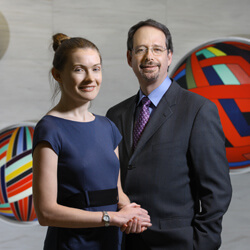 Along with colleagues at Baylor and Walter Reed, Steve Brant and Susan Hutfless hope to confirm triggers of Crohn’s disease.

Of the 71 genes known to make people susceptible to Crohn’s disease (CD), a handful stand out as tempting to study because of their potential to wreak havoc in the gut.

ATG16L1, for example, stirred the medical community two years ago when lab mice engineered for a version of that gene—its action mimicked a human risk gene—developed Crohn’s disease.

Well, not quite Crohn’s.

What the animals showed were quiet irregularities in the ileum’s distal epithelium, a region most vulnerable in CD. But the anomalies came only when the engineered mice were also infected with norovirus, the common culprit of cruise ship and other human viral diarrhea outbreaks.

The latch turned after dextran sodium sulfate, a mild colon-irritant, was added to the animals’ drinking water. The test animals developed what gastroenterologist Steve Brant calls “landmark” and “remarkable” Crohn’s hallmarks—deep ulcers in the bowel wall and transmural inflammation, including abcesses in the serosa.

“Producing these signs in an animal model has really been elusive,” Brant says. It takes all three—gene, pathogen, irritant—it seems, to model Crohn’s disease.

Now Brant, a clinician-geneticist who heads Hopkins’ Inflammatory Bowel Disease Center, and colleague Susan Hutfless are taking measure of the model in humans.

“This is as translational as it gets,” says Hutfless of the work they’re planning.

“Basically, we hope to see if intestinal infections trigger CD in people,” says Brant, “and if that effect is specific to those genetically predisposed.”

The retrospective study, which begins this fall, uses the Lamborghini of databases—well beyond a Cadillac—namely, the Department of Defense Serum Repository. Since 1985, the DoD has maintained a collection of both regularly drawn blood sera and health records of thousands of U.S. soldiers.

Hutfless learned of it from a Walter Reed collaborator on an earlier Hopkins project. And as Gastroenterology’s first on-staff epidemiologist, she can’t speak highly enough of the database’s possibilities.

The new study will analyze data from 1,000 soldiers for the six years before they developed CD and from 1,000 healthy military controls from that same time period. “We’ll be able to measure antibodies in the serum for specific gastrointestinal pathogens,” Brant explains.

With pathologist Daniela Cihakova, they plan to nail who’s exposed to the common norovirus or to Salmonella or C. difficile—bacteria that studies have tied to Crohn’s appearance.

The serum also holds enough of a soldier’s DNA for Brant’s group to use for gene testing—they’ll be looking for variants in five genes, including ATG16L1, that help shape response to gut flora.

Two strengths of the study stand out.

One is a built-in validity follow-up. If, for example, the first pass suggests that a certain gene-germ combination raises a soldier’s Crohn’s risk, the researchers will tap two new military populations of 500 CD patients and 500 controls to see if that still holds. “We don’t often have an opportunity like this to confirm what’s real,” says Hutfless.

Another plus will be the ability to go back with new-found certainty to the animal model to map CD’s biology and validate the model to test therapies. “Say, for example, that many soldiers have norovirus antibodies but only those actually sick from the virus go on to develop CD,” Hutfless says, “we’d hope the mice could tell why.”

“We believe we have a potential treasure trove of clues,” Brant says, “to the triggers of this disease.”