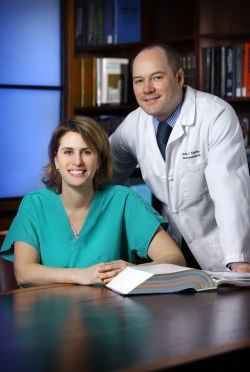 When a curve of stomach migrates through the diaphragm to press on a patient’s esophagus, resulting symptoms can be vague. Patients often mistake paraesophageal hiatal hernias for heart attacks; clinicians, less often, may diagnose uncomplicated reflux, angina, anxiety disorders or even chest infections.

Yet for Ronald Pease, 63 and semiretired, the symptoms were textbook. Though he described what he was feeling as “choking,” gastroenterologist John Clarke checked off the esophageal spasm, chronic heartburn and feeling of fullness as classic signs of the hernia and its not-uncommon companion, gastric reflux.

The clincher was the vomiting, accompanied by copious mucus. “You just hope you’re by yourself when that happens,” Pease explains.

What followed medically for the Baltimore man was a combination of refined presurgical workup and current, established laparoscopic surgery tailored to the size and position of his 3.5-inch hernia. It’s a sign of how far management has advanced for a problem that until recently meant open surgery, a week in the hospital and lengthy recovery.

It’s also a sign of the future. Hiatal hernias are more common with age and overweight. Some sources put prevalence at half of people over age 60, though less than 10 percent show symptoms. With the aging of the Velveeta generation, the need for hernia care is rising.

Under Clarke, Pease’s care began with a cine esophagram that  confirmed the hernia, followed by upper endoscopy to rule out other pathology. Baseline manometry showed that in spite of his trouble, the man’s peristalsis was “decent,” Clarke says. That’s important to ascertain; patients with weak peristalsis can have difficulty adjusting to the tightening tactics of the surgery. “They need enough force to push food through,” Clarke adds.

When patients arrive in Anne Lidor’s care, they’re typically in such discomfort that her surgical solution sounds like a godsend. That was the case with Pease, whose symptoms surfaced daily.

After seeing him and consulting with Clarke, Lidor, who specializes in GI cases, scheduled the fundoplication that would both wrap and fix Pease’s herniated stomach around the lower esophagus. The laparoscopic repair began with entry at his upper belly. Lidor closed incisions, four hours later, with a bioprosthetic mesh.

“Patients typically go home the next day,” she says.

Refining her technique wherever possible, Lidor has opted for the mesh over more traditional sutures, based on a meta-analysis she conducted. Mesh repairs, she found, reduce surgical failure rates by 60 percent.

She also opts for a mesh that’s bio-based. It produces fewer adhesions, she says, because it won’t stimulate an immune reaction. Bio-materials also speed vascularization and healing.

Of course, adds Lidor, “there’s no free lunch,” even with the laparoscopic approach. Patients must ease back into normal diets, for example.  Pease, however, has no doubt: “I really needed this,” he says.